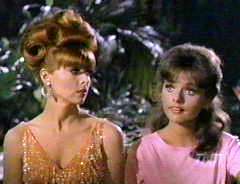 I don't think there has ever been a more well-known pop cultural question than this one:
If you had to pick, which would it be, Mary Anne or Ginger?

Maybe in the musical world a similar philosophical question is "Who is your favorite Beatle?" In comics for sure the question is "DC or Marvel?" But for main-stream TV, what else is there? "Who is your favorite STAR TREK captain?"?? For all the main-stream acceptance STAR TREK has obtained, this is still too much of a nerdy question. (Sorry, Trekkers, you know it's true!)

For those of us of a certain generation, meaning the kids who watched GILLIGAN'S ISLAND when it first aired (1964-1967) and then those of us who watched it in reruns thereafter, this is the perfect discussional point slash conversation starter. Do you prefer the down-home natural beauty and spunk of Mary Anne Summers or the sophistication and allure of Ginger Grant? Besides the characterizations, there is also the important consideration of actual beauty, as embodied by the actresses portraying them: Dawn Wells and Tina Louise. Obviously they are both attractive. So the question is: who do you think is *more* beautiful?

I know my answer, but I wanted to know what other men would say. So I sent an email out to 25+ guys at my office asking them the simple question: Mary Anne or Ginger? Of the responses I got, less than a handful picked Ginger! This surprised me, because....I mean....look at her! But some of the comments were "I prefer brunettes" or "Ginger is high maintenance." I also think it might have something to do with the fact that we are living in Columbus, Ohio. Mary Anne's "mid-western values" play better here than they would in, say, Hollywood or New York. Atleast, you could argue that. 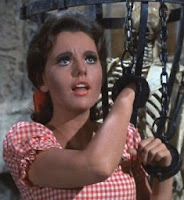 Most surprisingly of all, there were two guys who, when asked, said, "Who? I never watched that show." WHAT!?! I thought *everybody* watched GILLIGAN'S ISLAND. I guess I'm getting old.

Maybe there's a newer pop culture question for guys of a different, younger age. "Which FRIEND would you sleep with", perhaps? I suppose I could send that survey question around, too, but I think I would get wildly different responses, haha! 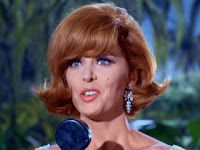 As for me, my choice has something of a story behind it. As a kid I was a big fan of Russell Johnson, who played the Professor. It was rare for me to hear of "other" Russells out in the real world, so when I saw him I took an immediate liking to him. He, of course, was linked with Mary Ann in the Theme Song, "...The Professor AND Mary Anne...here on Gilligan's Island." So I started noticing her, and wondering why Mary Anne didn't have more stories about her. Why was it always about Ginger? Now that I'm older and I've read some of the Tell All stories I know, but at the time I was always rooting for Mary Anne to have more screen time. Besides, she and The Professor seemed to be the most normal ones on the island, and I kind of liked that. And lastly, Ginger kept changing her hair-styles! If you read my article last week about Seventies Women, I'm a big fan of long, straight hair. When Ginger had that look going on, WOW. But mostly she had a bouffant (sp?) or a bee-hive or something in-between. NOT a fan of those looks; never had been and never will be. So put those reasons together and....it's Mary Anne, hands down.

Off to have a cocoanut cream pie. Aloha!
Posted by Russell at 8:55 AM