The most well-known female character in the POGO strip was definitely Miss Mam'selle Hepzibah. She made her debut early in the strip on October 30, 1950 to be exact. She was originally Porky Pine's "love interest" but only because he thought she was a female porcupine AND because she makes "the best popovers this side of the Chattahoochie River." The guys gave Porky Pine plenty of teasing as he made his way a'courting her for two weeks before she actually made an appearance (represented here from the book POGO Through The Wild Blue Wonder: ) (click to enlarge it)

Hepzibah in the Bible is the wife of King Hezekiah of Judah. The name means "my delight is in her." It is said by POGO scholars that the character was based in-part on Walt Kelly's second wife, but I can't vouch for that. All I know is that she started out looking much different than how she ended up. This next scene is from POGO: Prisoner of Love but was originally printed in the newspapers on August 21, 1969. Notice the fresh innocence of the two characters who were actually on their way to apologize to each other for an earlier misunderstanding: Pogo denied wanting to marry *any* woman in the Swamp, and Hepzibah was hurt that he included her in that denial. Here they accidentally meet again, and even though it starts raining (in spectacularly beautiful panels), they both marvel at what a nice day it is.

And thus is the charm and artistry of POGO represented for all in one simple sequence. 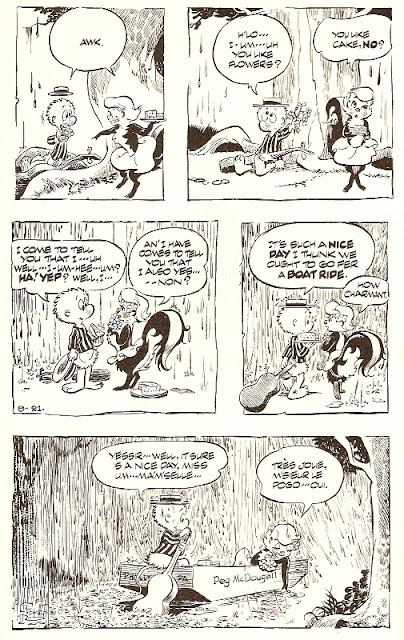