Last week I visited the Billy Ireland Cartoon Library & Museum at (the) Ohio State University. I had heard about it a few years ago when I moved to Columbus, but it's hours are only during the week so I never took the time to visit it before. Milton Caniff, the creator of such once-popular comic strips "Terry & The Pirates" and "Steve Canyon" was an alumnus of OSU, and he left much of his personal collection to the university. I believe that was the start of the collection. It has many historical comic strips, original art, and first editions of various comic-strip, comic-book, and editorial cartoons. It's named after Billy Ireland (1880-1935), the cartoonist for the Columbus Dispatch from 1898 until his death.

My wife agreed to go with me so I called to make sure that it was open on Good Friday. The woman who answered the phone told me it would be open and then suggested that I go to the website and make my "requests" ahead of time. That way they could pull them for me and have them waiting for me. I didn't really understand that, but I said okay, thinking it would be clearer when I went to the website.

Well, I went to the website www.cartoons.osu.edu and it wasn't any clearer. I managed to see that there was in fact plenty of original Walt Kelly POGO art at the library, so armed with that knowledge, I figured I would just make do.

The next morning we headed downtown and right away couldn't find parking. We drove past the open parking lot hoping to find something closer, then had to turn around and go back to that one because everywhere else was packed. Then, we actually walked right past the library because I was looking for a building, not a room. So the location was a bit confusing, but the people we asked for directions were nice so that was fine.

The library itself resembles a "reading room" at some metropolitan library, just with original comic strips and printing plates hanging on the walls and a ceramic Garfield statue sitting on a bench. I knew we were in the right place.

The Library appears small because the only space available to the patrons is the reading room. Except for a very limited "periodical" type display of books and magazines, everything the Library owns is storeid out of sight in "the stacks."

By this point I was ready to be impressed, and I was not disappointed. I went in and told the staff that this was my first time and I wasn't sure how it all worked. The student staffing the front desk knew who Walt Kelly was (props to her) but then called out an actual staff person to help me. A very friendly assistant curator named Susan came out from the back and helped me. She walked me through the registration process (my profile filled out, with a piece of identification) and then explained how to request things. She navigated me through their homepage system: you have to go to the How Do I Find....  page and then click on what you are looking for!

So since I was looking for original art, I was directed to their Art Database page. From there I entered "Walt Kelly" and saw an entire list of his work. According to Susan, the OSU Library has 36 boxes of Walt Kelly work! So I picked at random a daily strip, a Sunday strip, and from the end of the list, an illustration marked "Pogo with flowers, Churchy with book." That sounded like an illustration I have seen, and I wondered....? So I filled out three request forms and handed them back.

A few moments later, Susan brought out two of the three, and a pair of cotton gloves. I was asked to move my wife's purse and my cell-phone off the table. Then I was allowed to hold an actual piece of history. The Church-Nixon Spider strip was from Nov 20, 1973. The size was approximately 18 x 10 inches (45 x 24 cm).

When I handed the daily strip back to her I was allowed to study the Sunday strip from 1964. This piece of art was huge; it seemed to be approx  24 x 24 (60 x 60 cm). Here was a piece of art a little bit older than I was! It was humbling. To be able to see the craftmanship and artistry up-close like this was amazing. 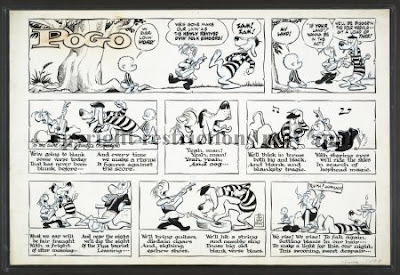 Lastly, another student staff member brought out another piece of poster board. This was quite surprising, for several reasons. First of all, it was the illustration I thought it was, the picture I just used on this blog last month when I talked about female characters in POGO!  Then I was taken aback by its size....in the book POGO Prisoner of Love it was printed at approximately 3 x 3 inches. The original, however, is drawn closer to 12 x 12 inches~!  I was so excited to know that this illustration was here, safe and sound in Columbus. I mentioned to Susan that this picture was from Prisoner of Love from 1969 and she jotted down notes to reference that information. It made me giddy to think that I was giving this great place some information that they didn't have. 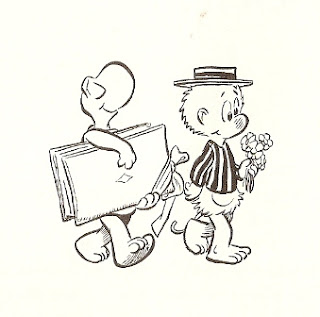 As we were preparing to go I mentioned to Susan that if the Library had any need for volunteer translators, I would gladly help translate some of their manga materials. (My wife had been reading some Japanese books in Japanese while I was busy with Walt Kelly.) She gave me the name of the OSU professor in charge of the Manga collections, and I contacted her after I got home.

We also talked about how the Library is moving to a bigger, better site next year in the renovated Sullivant Hall. There will be more space for more displays and collections and I strongly requested Saturday & Sunday hours!

I hope to schedule another day for another visit and at that time I will send an email with my requested materials beforehand and then I can spend the day reading Walt Kelly's papers and appreciating several box-loads worth of original art. Hopefully this is the beginning of a beautiful relationship. :-)