Today I want to celebrate two classic comic book creators whose birthdays are this week. April 22 is Steve Englehart's 65th birthday, and April 26, 1914 is Paul Norris' birthday. He passed away in 2007; he would have been 98 years old.

Paul Norris worked with editor Mort Weisinger to create a new back-up character for MORE FUN COMICS #73 (Sep 1941). Together they came up with Aquaman who, while being thematically similar to Marvel's Sub-Mariner,  (created by Bill Everett in 1939), was unique enough to still be well-known today, more than 70 years later. In the current AQUAMAN series, which made its debut this past fall, there has finally been a creator's credit added to his logo. So now people will be able to recognize Paul Norris' name in the same breath as geniuses like Bill Everett, Stan Lee, Jack Kirby, Bob Kane & Bill Finger, Jerry Siegel & Joe Shuster, Steve Ditko, and Gardner Fox. Thank you for creating my favorite super-hero, Mr. Norris!

As for Steve Englehart, for years he was my favorite comic book writer. He was a major creative presence at Marvel during the early 1970s. He wrote CAPTAIN AMERICA (the classic Watergate-era "Nomad" storyline), THE DEFENDERS, and, most famously, fifty issues of THE AVENGERS. His run on that series (105-151, plus 5 Giant Sized issues) ranks as one of the most classic-runs of that group. It was his writing on this title that turned me on to the Marvel Universe. He juggled the "biggies" like Captain America, Thor, and Iron Man, along with dozens of others I had never heard of before, AND he made them interesting! 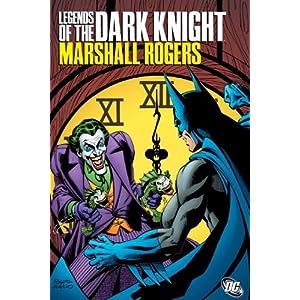 After his successes at Marvel he moved to DC, where he wrote Batman in DETECTIVE COMICS and the entire JLA in JUSTICE LEAGUE. He brought his talent for high-adventure stories and well-defined characterizations to both titles. His work on DETECTIVE, in particular, where he was teamed with super artists Marshall Rogers and Terry Austin, is considered one of the greatest Batman series of all-time. If you haven't read this series and like Batman, you are definitely missing out. Check your library for Batman: Strange Apparitions. Or Legends of the Dark Knight is still in print; buy yourself a copy.
Englehart's JLA work (JLA 139~150, skipping 144-145) has not been collected in trade paperback yet, but hopefully one day it will be. While he was JLA writer he took The Atom from being a self-conscious self-doubting nobody into a self-confident specialist. He re-interpreted the relationships between Wonder Woman and the male members, facing "Women's Lib" straight in the face. He not only added characterization to a dozen or more super-heroes who tended to be cardboard cut-outs, he added a married couple to the group (Hawkwoman joined her husband Hawkman) and he re-booted (?) Red Tornado. Even though it only lasted about one year, it is still known as a classic run of stories.
﻿
﻿

Since the Seventies he has bounced back and forth between DC and Marvel, handling series like GREEN LANTERN CORPS and AVENGERS WEST COAST for both.