Well, what did you think? Was it all it might have have been....but less?

First of all, the whole idea of having a story without any of the Justice Leaguers (the only characters my classes were familiar with) was just....stupid. I know I wanted to show more depth to my version of the DC Universe, but in hindsight....if I had stuck to the main characters that had actual connections to the "big guns" (Robin, Kid Flash, Aqualad, Speedy, Wonder Girl as The Teen Titans and then maybe the super-heroines I had introduced earlier) I think the story would have worked much, much better. I have said before that I needed a good editor on some of my stories; well, in my opinion this is the worst case of that.

So let's edit it together now, shall we? 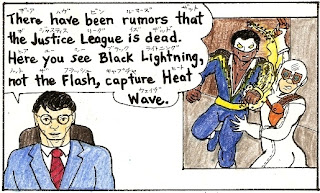 The first pages establish that the JLA is out of commission. Also a cameo by Black Lightning featuring him knocking out Heat Wave. This is a picture I had in my English classroom because it came from the DC Calendar 1978. So we can keep these pages. By the way, I patterned this news reporter on a friend of mine working in the town next to me at the time. It sort of looks like him....haha! 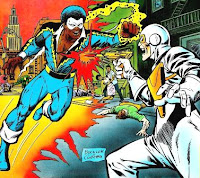 The next few pages are necessary. Yes, I might have been able to cut a panel or two, but I'm sure I needed to think in terms of panels and pages. We'll let this stuff go as is. Keep.

However, pages 7 thru 10 should have been cut. I included them because Japanese TV was running the old Filmation SHAZAM cartoons at the time and I wanted to tie these characters in with those. (And look, here's The Parasite making a return appearance! I'm sure I included him here because he got the shaft the last time he appeared, haha). Still, this whole sequence does NOTHING for the main plot. Now if I had added the 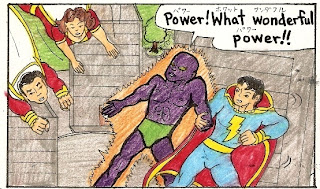 Shazam Family into the main action, maybe, but as is....nope. Which is a shame, because I always liked the Shazam characters. I think they could have been used as supporting characters. I wish I had written some "magic" story which would have been right up their alley. However, as is they just don't fit. Cut.

Pages 11 thru 14 gives the Teen Titans the required knowledge between what is happening to the JLAers and dreams. Plus I thought it worked pretty well and it's action and not just talking. Keep. 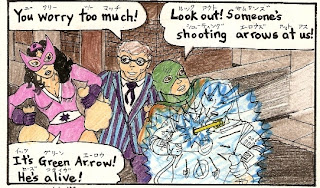 Pages 15 thru 20 are really the whole point of the cover, right? If I don't show The Teen Titans actually doing anything, I'm kind of wasting everybody's time. Plus, this is another pseudo "Injustice Gang" slash "Secret Society of Super-Villains" appearance. I was always a sucker for groups of villains getting together. When the enemy/target are the dozen good guys in the JLA, doesn't it make sense to team up with other bad guys? Keep. (This will be the last appearance of most of these characters....Mr. Freeze will be back, however....) 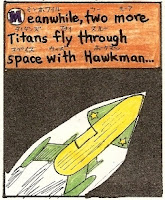 Now pages 20 thru 24 are the worst example of stuff that should have been cut. Hawkman on his own should have been shown rescuing Green Lantern in a half-page panel. This stuff is painfully boring to read. Cut.
(I do like using the Thanagarian space-ship, though. That has appeared a few times and will appear again.)

Pages 25 thru 27 are the kind of pages that could have stayed. I think they should have been dispersed throughout the book instead of lumped together here this way, but the idea was good. I would have even added a page for the Shazam Family and maybe Hawkman, in lieu of the cuttings. Keep.

Pages 28-29 feature the types of scenes that are not really deserving of two pages, but take up more than one. This type of thing is a victim of the layout: Keep.

Pages 30-34 In hindsight I should have sent Supergirl with the original group and cut a page. Cut/Keep. 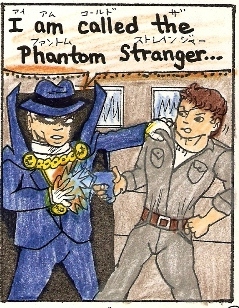 Page 37 I don't know why I had these three characters get *another* spotlight. Cutting this and going directly to Phantom Stranger is just as good. Cut.

Speaking of The Phantom Stranger, I have him do two bits that he actually did in the pages of JUSTICE LEAGUE: 1. he appears out of nowhere and saves them (JLA 104) and he disappears in a burst of light (JLA 150). He was a favorite character and I liked using him. I always had the intention of making him the "hero" of this story. It just took way too long to get there.

So, if we keep the conclusion as it is, this would have been a 35 or 36 page story instead of the mammoth 44 pages.

I promise that future issues will never be this over-produced again....well, almost never. :-)

Next issue we will get back to a simple little straight-forward super-hero story, and all I can say is, it was just "A Matter of  Time." :-)
Posted by Russell at 6:01 AM