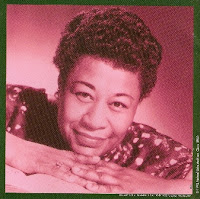 I don't remember when I first heard of Ella Fitzgerald. I must have seen her late in the 70s on The Tonight Show or some other variety show. I do know that my mother used to sing "A-Tisket A-Tasket" (among other "oldies"). 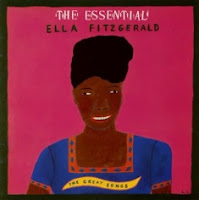 Anyway, I must have known who she was because in the early 1990s on one of my trips home I made a trip to Vintage Vinyl in my hometown of University City (MO) and bought the CD "The Essential Ella Fitzgerald." The note on it says, "Verve presents an introduction to the best performances by the greatest jazz artists." Although I have always hated the cover by Laura Levine, the CD itself is one of my all-time favorites. (I switched the booklet out and look at the photo by Michael Ochs, shown here, instead!) This CD includes such wonderful songs as "Drop Me Off in Harlem," "Ding! Dong! The Witch Is Dead" and "Summertime" as well as two versions of "Oh Lady Be Good," a slow version and a scat version. 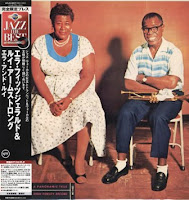 A few years later in Miyazaki my friend Moselle played the CD "Ella & Louis" and I dubbed a copy to cassette. Years later I found a similar compilation, "Ella & Louis Sing Gershwin." As you can guess, this is another of my favorites. I think my favorite is "They Can't Take That Away From Me."
When I'm in a certain mood all I need to do is listen to an Ella Fitzgerald song and I feel all right. "Pick Yourself Up" or "Cheek to Cheek" always put me in a pretty good place.

Ella Fitzgerald's birthday is this coming Wednesday, April 25, 1917. She would have been 95 years old. She died on June 15, 1996 after a long illness.
Here she is in a television performance in France in 1974, with my personal jazz motto: "It don't mean a thing if it ain't got that swing!" The first two minutes are absolute brilliance followed by another 2 minutes of awesomeness. :-)