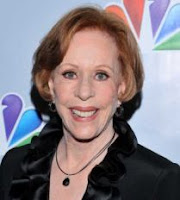 When I was a kid, between the ages of ten and fifteen, most every Saturday night my family spent time together watching The Carol Burnett Show. We laughed with Carol and her awesome cast: Vicki Lawrence, Harvey Korman, Lyle Waggoner, and later, Tim Conway. They always looked like they were having such a good time! My sisters often pretended to be Eunice and Mama from "The Family" at our dinner table. I had a fun childhood. 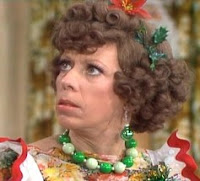 After both of my sisters went off to college and I got old enough to go out on Saturday nights, we stopped watching Carol. I have bought several TV DVD collections over the years, but Carol Burnett is, unfortunately, not yet available. I will buy it as soon as I see it and devour every season. She made her debut in 1967 and went off the air in 1978.

There were plenty of clips I thought about posting here. Besides having her classic variety show she made a name for herself on the older Gary Moore Show. She has recorded comedy albums and had television specials with such diverse friends as Julie Andrews and Beverly Sills. She was in several wonderful movies such as Annie and Noises Off. (If you haven't seen this, rent it. It's hilarious!)

Then I came across an episode of "Password Plus" from the late 70s where she and co-star/friend Vicki Lawrence portray Eunice and Mama actually playing the game Password with the late great Alan Ludden (Mr. Betty White). Also on the show is the late McLean Stevenson and Joanna Gleason from "Hello, Larry." Not only are Carol and Vicki playing a word game, they are damn funny doing it. Now *that* is talent. So I knew this was the clip I wanted to feature.