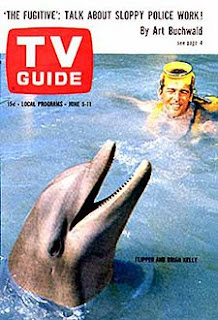 This week is Be Kind To Animals Week, originally created by the Humane Society, but supported by all sorts of other wonderful organizations. Please consider visiting the site of another wonderful organization, American Society for the Prevention of Cruelty To Animals (ASPCA) and helping them out. After all, we ARE their voice. (This is especially true in regards to today's topic, because before this organization became stronger and more well-known, I have no idea how well these animal actors were treated....!)

To help celebrate Be Kind To Animals Week here at FoJ, and because today is TV Tuesday,  I would like to talk about My Magnificent Seven Favorite Television Animal Stars. Now I'm not including animals that have made important guest-star apperances, such as the tribbles on STAR TREK or the tarantula on THE BRADY BUNCH. No, I'm only including those animals that put their paws or hoofs or flippers to long-term contracts as lead actors in TV shows. I'm also not going to include two of the more famous animals stars, Rin Tin Tin and Gentle Ben, because although I have heard of these shows, I have never actually seen them! If you disagree with this logic let me know and I will take the time to track down DVD or HULU copies and see if they should have been included.
So without further ado... 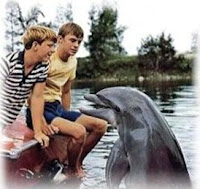 Great theme song, handsome cast, beautiful location photography in Florida, and a spunky, lively dolphin lead, didn't FLIPPER represent every boy's dream? I mean come on, can't you just imagine Sandy or Bud saying, "You have a cat or a dog? WE have a dolphin!!"
Sure, the stories were sometimes simple, but the affection between the two brothers, their widowed father the marine ranger, and their dolphin was just so clear. It was one of those truly wholesome and fun shows that disappeared after the Sixties....
Recently, dolphin trainer Ric O'Barry has had a change of heart about taking advantage of the animals portraying Flipper and was part of the  2009 documentary THE COVE. If you have not seen this movie and are interested in animal rights, you should. WARNING: it features gruesome and powerful scenes. 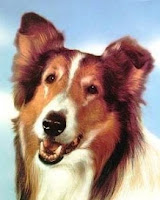 2. Lassie on LASSIE (1954-1974)
Everybody knows Lassie, but the reason she didn't make my Number One spot is because 1. I never liked collies all that much and 2. she was always portrayed as being super-smart. We've all heard the joke about Lassie: She barks, and the comedian says, "What's that, girl? Timmy fell into the well and is trapped?" She could do no wrong, and long-time readers will know I'm not a fan of those types of characters, no matter who (or what!) they are. Besides that, Lassie's show's format changed about four times over the twenty (!?!) years she was on TV: from farm family pet, to park ranger helper-dog, to ranch-hand. The episodes I remember watching the most were the ones where she belonged to forest rangers. I remember Lassie hanging out with baby mountain lions and meeting up with dangerous rattlesnakes, plus the runaway or misunderstood kids. That's the LASSIE show I watched.


3. Fury on FURY (1955-1960)
I don't remember much about this show except that I would watch it most mornings before I went off to junior high. Bobby Diamond played the orphan Joey who somehow was adopted by Peter Graves and William Fawcett at their ranch. The show had a very strong moral compass: honesty was the best policy, goodness won out, be kind to animals. I was never a big horse fan, but for some reason this show worked for me. Plus I was always a huge Peter Graves fan, and Bobby Diamond as the lead kid was believable. 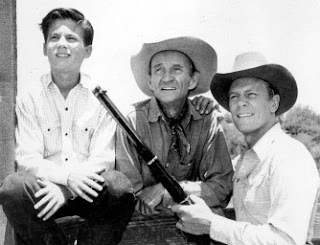 4. Tiger and Fluffy on THE BRADY BUNCH (1969-1974)
These two are coupled together, and made their debuts at the same time as the rest of the Brady household. In the pilot/premiere episode, the boys had a dog and the girls had a cat. Both played important roles at Carol's and Mike's wedding, and then ended up going on their honeymoon, too. Fluffy, unfortunately, faded into the background pretty quickly after that, but Tiger stayed for all of the first two seasons. He played the pivotal role in such episodes as "Jan's Allergy," "House of Cards," "Tiger's Family," and "The Practical Joker." 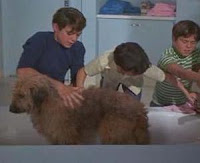 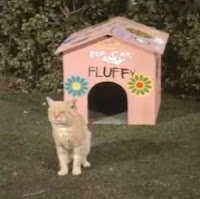 5. Silver and Scout on THE LONE RANGER (1949-1957)
From way before I was born Westerns were a staple on television. So by the time I was a kid watching TV before or after school, quite a few of the syndicated shows were Westerns. None were more fun to watch for me than THE LONE RANGER, which meshed the Western genre with the super-hero genre. Clayton Moore and Jay Silverheels were two of my earliest heroes as the lead and his faithful Indian companion, Tonto. Their horses, Silver and Scout, were also good friends. In their heydey each of these characters had their own comic-books and tie-in toys. I'm not kidding. Nowadays Silver is by far the more famous of the two, but he would be less of a hero without his good buddy, Scout. 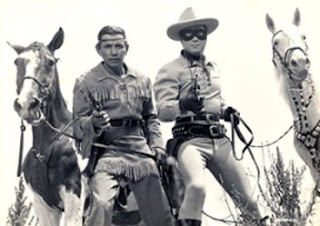 6. Clarence and Judy on DAKTARI (1966-1969)
Marshall Thompson portrayed Dr. Marshall Tracy, an American veterinarian and conservationist at the Wameru Study Center for Animal Behaviour somewhere in Africa. He was the human star, but my favorites were Clarence the Cross-Eyed Lion and Judy the Impish Chimpanzee. This is another one of those shows from my childhood that I remember only faintly, but with affection. I know there was a bi-racial and international cast, which I thought was cool. Their jeep painted white with black stripes like a zebra was cool, too. I think I'd like to see this show again to see if it holds up. I remember liking the theme song, too. It was produced by the same people who did FLIPPER and GENTLE BEN. Animal shows were big in the Sixties, I guess. 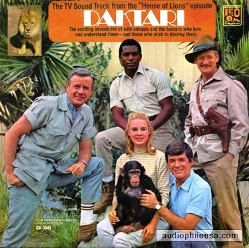 7. Debbie the Bloop on LOST IN SPACE (1965-1968)
This was one of my favorite shows as a kid. I would watch it every day, right after school, on KDNL TV-30. The first season Penny Robinson, portrayed by Angela Cartwright, hung out with a space creature she named Debbie. The only noise it would ever make was this amusing sound effect, "bloop bloop." She appeared throughout the year, usually just in the background scenes or riding in the Space Chariot. However, she did have pivotal roles in "The Oasis" and "Return From Outer Space." In the second season she appeared several times but then simply disappeared. Years later I read that the chimp hated her glued-on "wig" and was therefore ornery. She would bite Angela and Jonathan Harris (Dr. Smith), and that is why she was let go. 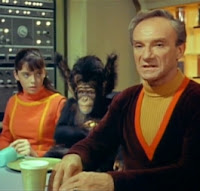 Having read about these famous animals, please do consider visiting the site of American Society for the Prevention of Cruelty To Animals (ASPCA) and helping them out. Before this organization became stronger and more well-known and therefore had some of the clout they have today, some of these animals could have been treatly badly. (As the dolphin trainer on FLIPPER asserts that they were). Remember, the title on films and televison programs "No animal was harmed in the making of this motion picture" is a relatively new guarantee.
Posted by Russell at 7:00 AM