Starting with this issue I started to update and revise already published stories to fit "my" DC universe. By this time I had gone back to the States on vacation and picked up some more of my comic-book collection, including all of my AQUAMAN, JUSTICE LEAGUE, and SUPER FRIENDS books. My goal was to try to cut down on the time and effort of writing these bilingual comics so I could spend more time drawing them, theoretically publishing them more often.

As I've explained before, my "publishing" schedule went from April of one year to March of the next, which was (and still is) the school year in Japan. I would try to get my first issue of the new volume out pretty quickly, say in early May, so that the new kids in my English class would be exposed to them right away. Then over the course of the year I would try to have an issue in the late summer (when I sometimes had more time to actually work on them) and then again in the later winter/early spring. Too close to March and I would run out of time and the kids would, too, often missing classes for more important life events at the end of the school year.

So....keeping that in mind, it is strange that last issue #16 was published in 1995. That would have been February or March for sure, as it was the end of a two-parter and I never let those storylines hang over the course of a school year.

What happened was that the kids SO hated the Teen Titans/Dr. Destiny issue in #16 that I got discouraged for the second time and swore off making these comics. I was burnt out and feeling unappreciated! Plus I'm sure there were plenty of other things going on in my life...this would have been the time when I had three good friends living near my town and we did all sorts of international events together.

However, eventually I got bitten by the creative bug again. Like I said, I had comic source material by that point, so I probably sat down and played with a couple different issues, trying to come up with the best fit. In the end, the next three issues would end up being "re-imagined" stories. First up: SUPER FRIENDS #22. It features Chronos, a villain I had already established in "my" DC universe. It featured all the main super-heroes, and then I was able to wedge in a few additional characters. And I actually like my ending better than the original's, haha!
Translation was assisted by my office co-worker again, Mrs. Ikuko Ochiai. In this first issue I "re-imagined" you can see that I did not credit Ramona Fradon for the layout of the art. So I want to point that out here: several of the pages' layouts were copied directly from Ms Ramona Fradon's wonderful work. Thank you! 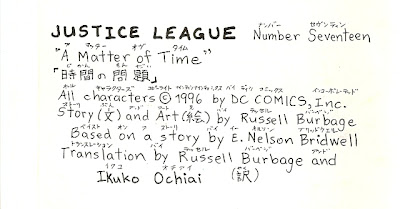