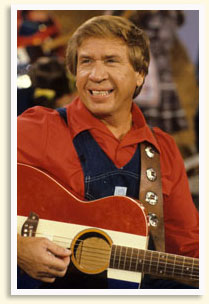 I am embarassed to admit that I came late to the Buck Owens band-wagon. I knew him only as the host of HEE HAW when I was a kid. As I got older I learned that he had written "Act Naturally" for the Beatles. As I got older still I figured out that I had that last part a tad backwards. Then I learned that he also wrote "Crying Time Again" that I knew as a Ray Charles hit. I listened to many of his songs and became a fan.
Buck Owens was born on August 12, 1929.
At his height in the late 60s and early 70s, he had 21 Number One hits on the Billboard Country & Western charts. Among my favorites are "Act Naturally," "Johnny B. Goode (live)," "Love's Gonna Live Here," and "Buckaroo (instrumental)." I go back and watch him on HEE HAW and notice just how good he was. Sure, the jokes are terrible (!) but the fun feeling is palpable. He was quite an entertainer.

Here he is doing another one of my favorites, "Above and Beyond," with his best friend Don Rich. It was written by Harlan Howard, and hit #3 on the C&W chart in 1960.

HAPPY BIRTHDAY, BUCK OWENS!!
Posted by Russell at 7:00 AM