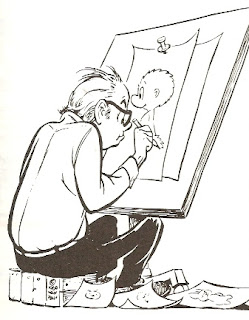 August 25, 1913 is the birthday of one of the greatest cartoonists the world has ever known. I'm talking about Mr. Walt Kelly, the creator of POGO.

I don't know what to do to help spread the word how great Walt Kelly was. He worked on his award-winning comic strip from 1948 until his death in 1973. At that time he was a household name in the US, and probably in certain international circles as well. Unfortunately, now that he has fallen off of the cultural radar. He never contracted to have his characters appear in various TV specials or merchandise like Charles Schulz' SNOOPY. (He oversaw one TV special in 1969 that he hated and never did another.) He never had his characters appear on a Broadway show like LIL' ABNER or (Little Orphan) ANNIE. His characters were never in a full-length Hollywood movie like DICK TRACY.

What all this means is that for two generations now there has been no love given to these great characters.

Do you remember CALVIN & HOBBES? How about THE FAR SIDE? Those are also two wonderfully creative comic strips that are going to f-f-fade away because they have ended.

POGO The Complete Collection is out now. The second volume is coming out in another month or so. I urge everyone reading this to go to the public library and request a copy. Then read it and tell me if you don't agree that it is some of the more beautiful and funny stuff you've ever seen. And this isn't even Walt Kelly hitting his stride yet!


Happy Birthday, Walt Kelly!
You are not forgotten!