JL #20 "The Return of the Weather Wizard!" Afterward

So...what did you think? 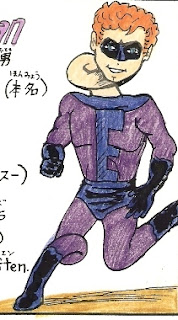 As I talked about in my FORWARD, this is one of those bittersweet issues for me. Reading it some ten plus years later I have to say I am proud about how it stands up; each character has something to do and it flows pretty well. It does pain me that I have extra holes on each page because I mis-aligned the  the setting of the hole puncher! And some of the art just hurts---literally--to look at now.

First off, as I mentioned in the FORWARD, I regret that I used this costume for Ralph Dibny, the Elongated Man. This was another issue to "star" Ralph in a featured role. He continued to be easy to write and easy to visualize, although I did try to not overdo the stretching neck bit. I'm glad to say that I never used this costume again. In fact, after this I mostly stuck to his traditional "true" JLA-era red costume.

Speaking of Ralph, as soon as I decided to have the story begin at a basketball game, I knew I would have Elongated Man comment on then-current superstars Michael Jordan and Dennis Rodman. Basketball was huge in Japan and especially huge with my English class students, who wanted to study English and go to the US to watch or play basketball. So this exchange between the JLAers was entertaining to my kids. Those who thought Dennis Rodman was TOO much of an extrovert could still see how Ralph Dibny would want to emulate him. :-) 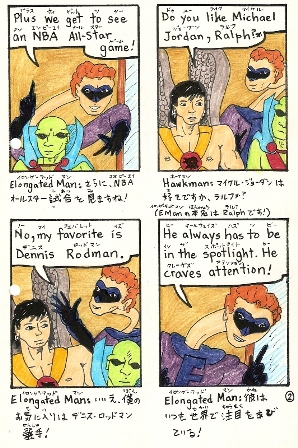 I enjoyed introducing Lois Lane and Jimmy Olsen to my universe. I think people who had seen the SUPERMAN movies would know who they were, and it made sense for them to do some of the narrating during the action at the Metropolis basketball arena. 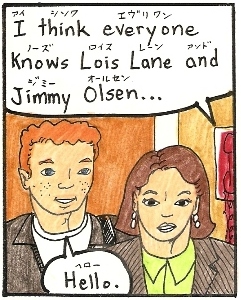 I have to say now that I really liked the idea of the Weather Wizard attacking the All Star Game *before* he thought the JLA would be there. I mean, come on....criminals are all egotistical, right? Who would resist showing up and robbing a venue that an hour or so later the JLA was scheduled to appear in? I thought that was clever...and although it's not re-printed here I also liked the JLAers' response to this, "We like basketball, too, ya know!" 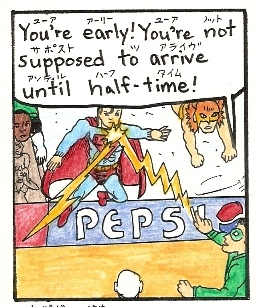 This is just a quick visual I came up with. I wish I had been better at drawing a telephone, but I think it's clear what GL is doing. 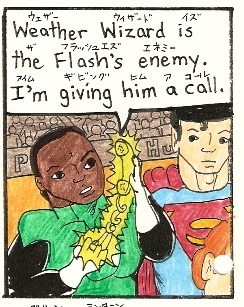 One thing I didn't like about my series is that too many issues were stand-alone. Because I only published once every three months or so there was not much cohesiveness (if that's the word I mean) between issues. So for quite a while I tried to introduce super-villains that I could have return again and again to try to give depth (if that's the word I mean) to my universe.  Of course, obviously my job was not to be a professional comic book publisher, so there wasn't anything I could do about it besides make these types of references to past issues. 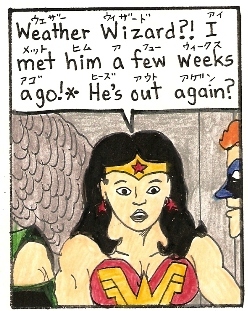 Finally I have gotten used to the idea that unless it's an A-1 Emergency, there is supposed to be somebody on monitor duty. Because Hawkwoman had appeared in an earlier issue but hadn't done much, I chose her to use in this type of cameo. It does help to show that she and Wonder Woman are good friends, too. 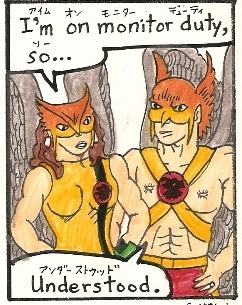 This issue is one of the best to show how well the JLA works as a team. Unlike several recent issues where one character or two characters "save the day," in this story Wonder Woman saves Hawkman who saves Green Lantern who saves Martian Manhunter. Original JLA writer Gardner Fox was great at this type of story, and in that sense I feel this story is dedicated to him. 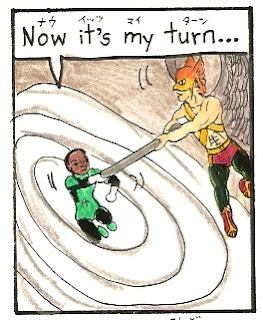 As I've written about before, Superman was the most difficult character for me to write. Really, he should be able to do everything on his own! So I have a playful dig at this by having Elongated Man assume that Superman saved everybody's life. Of course it was Green Lantern, who I enjoyed writing much, much more! 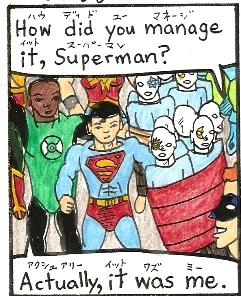 And lastly, here's my "funny ending." It had been established in DC Comics that The Flash is always late in his private life. So I thought it would be amusing for The Fastest Man Alive to make a cameo appearance at the end of the adventure. Similarly to Superman, if The Flash was written well there wasn't much he couldn't do. If you go back through my stories you'll often find that I handicap him, Superman, or Batman (Batman because he was TOO popular) in order to let the other characters shine. I tried not to be too obvious about it most of the time. Anyway, I thought this was a nice way to end the story and I really love the way the breeze from The Flash's arrival knocks Green Arrow's cap off his head. 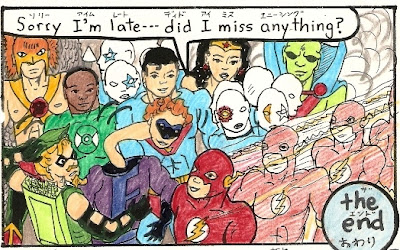