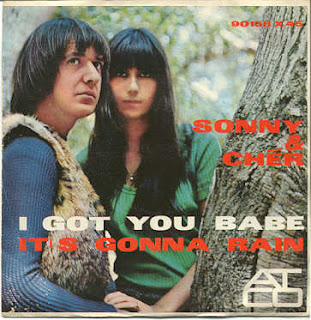 Fifty years ago this month the classic love-song and karaoke standard "I Got You Babe" by Sonny& Cher hit Number One on the Billboard chart. It stayed there for three weeks in August 1965.

Written by Sonny Bono, he was sure it would be a smash. Initially their record label intended to release the flip side as a single, but when radio station KHJ in Hollywood got hold of the record and began to play it, it hit BIG. It was #1 in the USA, Canada, and the UK, and Top Five in most other major musical markets. It sold millions of copies. 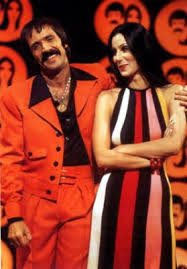 "I Got You Babe" became the theme song for Sonny & Cher. When they guest-starred on an episode of The Man from UNCLE, the background music in the episode was "I Got You Babe." When they headlined on their own variety show on television in the mid-Seventies, the song was used as the opening and closing credits. 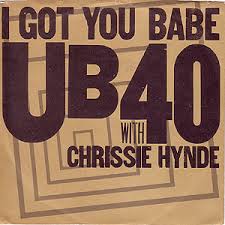 In 1985, British band UB40 covered the song with American singer Chrissie Hynde. Their song hit #1 in the UK, Ireland, New Zealand, and Australia.

On November 13, 1987 the duo sang the song on Late Night With David Letterman, for the first time in more than ten years.

The song was used famously as the wake-up music in the film Groundhog Day (1993), starring Bill Murray. 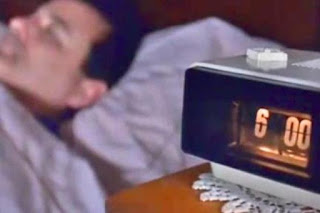 Although Sonny Bono died in a skiing accident on January 5, 1998, his song will live on forever.

The remake by UB40 w/Chrissie Hynde

Their appearance on Dave Letterman in 1987.
It looks like Sonny is crying at the end.
It brings a tear to my eye every time I watch it.
Posted by Russell at 6:00 AM