I will be the first to admit that some of the art was not very good. I guess when I take time off my artistic abilities kind of stagnate? Or maybe I just get lazy or rushed? Some of the art is good, but too many panels remind me myself of Vince Colletta with dull or blank backgrounds. And for that I apologize. I will try to do better in the future.

Of course, I have said it before and I will say it again: I consider myself more of a writer than an illustrator. And I DO like the story, and some of the dialogue. Let me tell you about how this particular story metamorphosed....

Who here has read any of the Mike Friedrich issues of JUSTICE LEAGUE? He wrote issues 86 thru 99, circa 1971. Each story was either a stand-alone or a two-parter, but they also had little things that linked them together into one long stretch. It was like we were reading one long week or two in the life of the Justice League. I wanted to do something like that, so I started in the last issue with the kidnapping of Batgirl and Elongated Man. I continue it this issue with the other members facing off a group of bad guys in California. From there it will stretch atleast one more issue. After that, we'll see. It's a lot of work to "coordinate" these appearances, so I may give it a rest.

Originally I wanted to put Batgirl and Elongated Man against Brain Storm because they shared the same color schemes: blue and purple! I also liked the idea that there is something about "Tier Two Characters" that attracts "Morts" like Killer Moth and Brain Storm to fight them. So that made sense to me. I already had an idea for Green Lantern and his group, to have a "welcome back" party for Hawkman and Hawkwoman, so that dictated the members I could use this time. And we were off!

You may have read this story and the pages where Red Tornado is telling us about Brain Storm and thought to yourself, "Russell is setting up something. Red will have a hand in Brain Storm's eventual capture." Well, originally, he did! I had Red Tornado play a bigger part at the end of the story, but as I moved forward in the creative process I realized I had to have Elongated Man and Batgirl take Brain Storm down to prove that they really were viable characters. So although I had a whole Red Tornado smack-down scene written, I took it out. I hope to use it the next time he faces a bad guy, though. 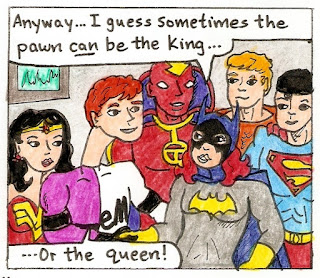 The other thing "fun" about this story is that while I was writing it, I was faced with the problem that Brain Storm would come up with random menaces for the JLA...so how could *I* be "random" in a creatively set way? I hit on the brainstorm of my own to ask my friends for help, and then use whatever suggestions they came up with. My friend Richard, for example, suggested Wabasha, Minnesota as a location. Maybe he had just seen the movie Grumpy Old Men and thought of it? A little research and I found that it really does have a National Bald Eagle Center. So that was good enough for me. I want to thank my friends for their suggestions. And I doubt I will ever use Brain Storm again, because he is very difficult to write! 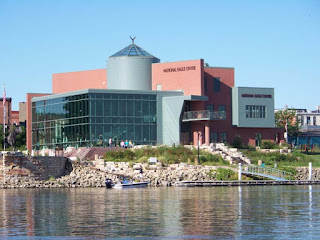 Here are a few other things I liked about my story.

Originally I had the story starting with Martian Manhunter. However, I hit on the idea of Superman doing "administrative" things while listening to world-wide radio alerts, and that worked better with him than it did with J'onn. A quick check with Superman fan Michael Bailey to verify that Superman signs his autograph with his left hand, and I was good to go.

I used the "classic" JLA pose of them fighting Brain Storm in "true" continuity. In real life, the character made his debut in JLA #32 (Dec 1964). Of course, Hawkwoman's role here was taken by Hawkman. 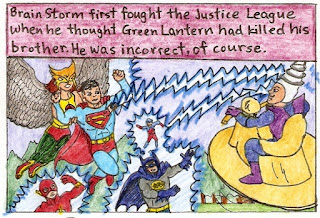 Red Tornado tries to offer Ralph's wife, Sue, words of encouragement. He ends up sounding a bit blood-thirsty. I figured that he would lack social graces, and say, in effect, "We'll either rescue him, or capture his murderer."
I followed this comment with both Aquaman and Wonder Woman telling Sue, "Don't worry" because I figured they would say this to her. 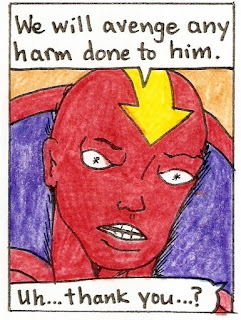 In the original story, I spent more time in Gotham City. I spent a whole page explaining how the JLA was tracking Brain Storm. I actually went in detail how Superman and Martian Manhunter's powers worked. I had a whole scene where they used flash vision to try to track Brain Storm's energy. However, it read more like an episode of CSI than JLA, and after working on the overall pacing of the story, I dropped that bit. I did quite like it, though. 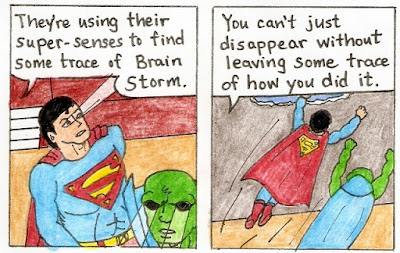 I came up with the idea of robbing an armored car and turning it into Under Armour cloth. I think that was clever, and am not above tooting my own horn. 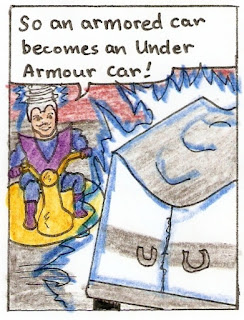 In MY universe, Batman is a friendly professional, not just a dark figure of justice. He is more the character featured in the old Brave & The Bold comics or cartoon series. Yes, he takes things seriously (he's the one to tell the JLAers they have to get Batgirl back to Gotham at the end),  but yes, he also smiles. 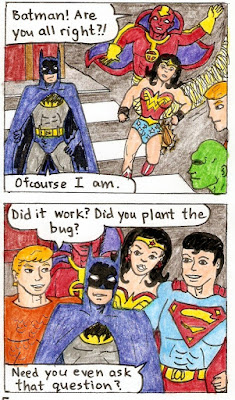 It was never made explicitly clear in the DC Comics universe, but I figured that the JLA *had* asked Batgirl to join the Justice League on atleast one occasion. Although there were arguments about "one unique power" requirements for new members, it was only ever brought up by Steve Englehart, so I think it was a mistake. During Gardner Fox's classic run on JLA, the only criteria was that a new member could join at a rate of one at a time. Anyway, I think the JLA *would have* asked Batgirl to join, and I think she would have deferred. 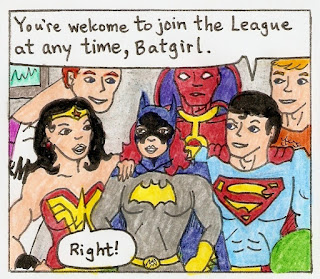