JL #26 "The Stormy Return of the Red Tornado!" Forward

This is another one of my favorite issues.

By this point, I think I really knew what I was doing: the plots were based on classic JLA stories, so I started on the right foot; the drawings were good enough to get the job done, and the coloring and effects I went for usually worked in context. Oh, sure, there are still certain artistic mistakes everywhere, like how on the cover Red Tornado doesn't appear to be angry or upset while attacking his team-mates, but those were mostly because I was creating these stories on such a tight schedule; unless something was unclear or just plain wrong, I usually left it in because the time it would take to re-do it all would just be too much! Looking at this cover now, I *hate* the way The Elongated Man turned out, and I'm not pleased with how Red Tornado isn't very dynamic...but, oh, well.

This story starts with a cover based on the classic by Dick Dillin and Jack Abel from 1968. Red Tornado was the last character Gardner Fox created in the pages of JUSTICE LEAGUE before he left the book, just two issues later. Coincidentally enough, this was also the issue where long-time JLA artist Dillin came on the book; he would stay until his death in 1980. The title of this story is the same as that 1968 issue, by the way. 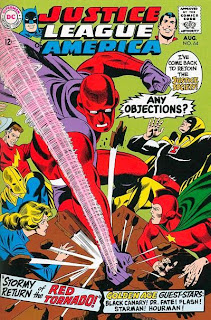 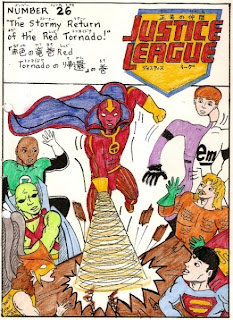 The story itself is based on JLA #106 by Len Wein and on JLA #146 by Steve Englehart. I will go into more detail as to how and where I combined them, but if you are familiar with these stories it will be pretty obvious what I did to make them fit "my" universe.

By the way, Red Tornado, because his name actually "meant" something, was introduced here with his phonetic name as well as its meaning. If you look at the characters directly in front of the English name, "Red Tornado," in the title blurb on the cover above, they are read "aka-iro no tatsu-maki," which is Japanese for "red-colored tornado."  From now on, he will just be addressed as "Red Tornado." The translation of his name will only appear in the roll call portrait section.

This is the only issue where I used an established Superman villain as the main bad guy. I had read an article somewhere about how characters like Grodd the Gorilla, Lex Luthor, and Brainiac would have been natural JLA foes, but how the editors preferred using JLA-only villains, and not crossing-over established bad guys. At the same time I had the DC Comics Collectors' Cards, and Brainiac was one of them. The story by Steve Englehart used a villain called The Construct, so it was easy to replace him with Brainiac. Let me know if you think it worked. Much like I used Chronos (an Atom villain in the comics) as a JLA villain, I kind of fudge the information here to make it sound like the JLA has faced Brainiac before.

This is the last two-parter I ever did. After this issue I stuck to one-and-done stories. At about this time I was beginning to think seriously about leaving Japan, and I wasn't sure I would have time to create all of the stories I wanted to at tell....so I kept them to one-issues so as to make them more manageable. More on that background information later.

Lastly, my co-worker Yuzo Saito helped out on translation again this issue. I don't remember the circumstances; probably because Kinuyo-san was busy, and because Yuzo was an easier, more immediate source because he was right there in my office. Regardless, I'm quite pleased with the way the Japanese turned out. 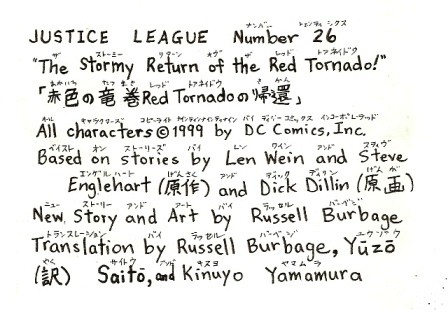