Note: "Russell's Ken-Bun-Ki" is a series of articles I wrote for my Japanese City Hall newsletter back in 1996-97. They were articles about life in America or life in Japan as experienced by an American. This one is from February 13, 1997.

In America, February is "Black American History Month." "Black History Week" was started on February 7, 1926 and from the Seventies it became a national and a monthly event. In many cities there are special events such as parades, displays of the works of black artists, and speeches by black authors. In schools famous black people come to speak or there are special seminars about Black American history.
My home-town in St. Louis was approximately 50% Black, so every year there was something fun going on in February. I like history, so I really enjoyed studying about Dr. Martin Luther King, Jr and the Civil Rights movement or Black politicians or scientists. Also, because all of the Presidents and politicians used to be White men, I liked studying average Americans more than studying them. For example, I first learned during Black History Month that the first victim of an American war was a Black man and about the bravery of the Abolitionists. Also, Black American inventors have created quite a lot of stuff! The fire extinguisher, the traffic signal, the fountain pen, and the golf tee were all invented by Black Americans.
I think a lot of Japanese have a misunderstanding about Black people. I sometimes hear prejudicial things like "Black people are fast" or "They're good dancers." Sometimes the idea of "Black people = Bad people" still exists. I think people are people. It would be wonderful if people could judge others without considering the color of their skin.
Everyone, won't you please use "Black History Month" as a chance to study more and more deeply about American history? 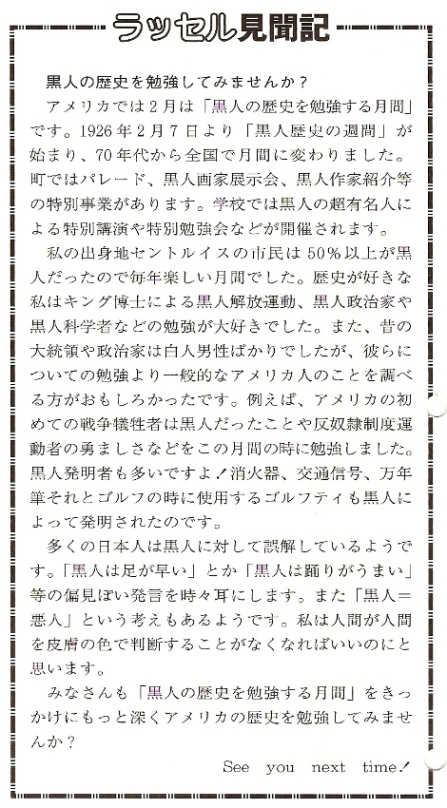