Anniversary of the End of The Korean War 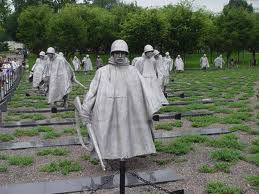 On July 27, 1953 the representatives from China, the two
Koreas, the US, and the UN agreed to The Armistice Agreement establishing the border between North and South Korea at the 38th Parallel. This was in lieu of a Peace Treaty, but had the desired effect to end the hostilities of  the "police action" that was The Korean War.

The nation of Korea had been invaded and conquered by Japan in 1910. From then until 1945 the Koreans fought back against their invaders. Forces and groups who would later create North Korea were supported by the Communists in China (who was also by this time fighting against Japanese invaders). Syngman Rhee, the first President of South Korea, was supported by the other Allies, UK and USA.

After 1945, much like the divided city of Berlin, Korea was cut and spliced for the victorious Allies. However, Kim Il Sung in the North had delusions of grandeur and wanted to re-patriate the entire peninsula. Believing that the South was vulnerable, forces from North Korea attacked.

Three years and a month later, the conflict was ended. Military casualties combined for all forces are estimated to be close to 1.6 million. Another 2 million Korean civilians were killed in the fighting. Countless untold millions of dollars of damage was done, both physically and mentally. The two Koreas have still not signed any Peace Treaty, and South Korea's army is on constant call in case of another attack. All men must serve in the Korean military to help support their country's independance.

For several years the only vision of the Korean War the average American had was from the movie and TV series, MASH. Personally, I always found it a tad ironic that the majority of Korean characters on the TV show were Japanese! I always heard that Koreans hated the show because it made their country to look like it was existing in poverty.

Since the end of the TV series MASH in 1983 Seoul has hosted the Summer Olympics (1988) as well as the World Cup (2002). It continues to have a huge impact on Asian Pop Culture. It is considered more as a developed nation and a strong ally, and the war that brought such chaos and tears continues to fade into the background. The elder Koreans dreamt of uniting the two countries, but it seems that younger South Koreans don't hold that sentiment nearly as much.

Here's to all those people who survived the Korean War (including Jamie Farr, who played "Klinger" on MASH), and in honor of all those souls who didn't.....