Anniversary of the movie HELP! 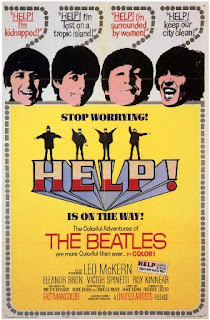 Forty-seven years ago today, the Beatles' second movie and first color motion picture made its debut. HELP! had its ROYAL premiere on July 29, 1965. And just so that we're clear, "Royal" in this case meant that Queen Elizabeth herself was at the theatre when the movie was first shown!!

If you haven't seen this movie yet or recently and you like spoofs or James Bond type movies or The Beatles, you should see it again. It's not exactly hilarious, but it is fun. Just watching the trailer below you can see that the excitement inherent in the story.

Oddly enough, none of The Beatles actually cared for the movie all that much. They felt "outside the creative loop" with director Richard Lester (who also did A HARD DAY'S NIGHT the year before) and thought the story was not as good as the first one. There had been plans for more Beatles movies, but except for a British TV production a few years later (MAGICAL MYSTERY TOUR) the only movies left to be made were concerts.

I always thought it was cool that the lads were spelling out the word "help" in flag semaphore code in the poster and on the LP cover. However, I have since learned that they aren't! They're just standing there as if they were....their gestures are close to "R-V-U-J" in the semaphone code, which, obviously, means.....nothing.

Email ThisBlogThis!Share to TwitterShare to FacebookShare to Pinterest
Labels: History, The Beatles