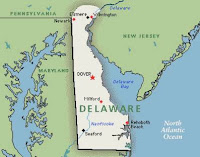 Today is the anniversary of the ratification of the Constitution of the United States by Delaware. Delaware takes great pride in being the first of the 13 colonies to ratify the Constitution. They proudly claim the honor of being The First State.

Parentage: The word "delaware" comes from Thomas West, the Baron de LaWarr, who was an early governor of Virginia.

Motto
"Liberty and Independence"
Ah, they probably came up with this first, too.


Nick-Name
The First State
They definitely are proud of this~!

On the License Plate
and one more time....
"The First State"


Anybody From Delaware
Ever Grow Up To Be President?
Nope! 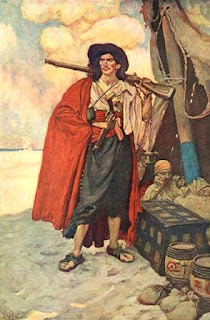 Valerie Bertinelli
actress, "One Day At A Time," etc

Ryan Phillippe
actor, "I Know What You Did Last Summer"

A Song For You....
"Bad To The Bone"
written & sung by
George Thorogood
and The Destroyers
(Thorogood was born and grew up in Delaware)
Posted by Russell at 7:00 AM