Note: "Russell's Ken-Bun-Ki" is a series of articles I wrote for my Japanese City Hall newsletter back in 1996-97. They were articles about life in America or life in Japan as experienced by an American.
This one is from December 5, 1996.

Everyone in the world wants to be happy. They want to be healthy and well-off. However, bullying, sexual discrimination, and prejudice against foreigners or the handicapped or the burakumin (Japanese underclass) is still occurring in Japanese society, even if we do not realize it.

Human Rights  Week is December 4-10 (1996). Discrimination is not a problem of the past, or a problem that has been solved. If we look at the issue from a "let sleeping dogs lie" perspective, the problems will never be solved. Every single person must look in their own heart and rid themselves of prejudice.

The other day I attended the "Internationalization Forum in Miyazaki." The guest-speaker was the actress and essayist Keiko Kishi. Her speech's theme was "Country Borders Move." She moved to France and married a French man, and now travels with their daughter. I thought her life reminded me of mine. Her way of thinking is also similar to mine. Although we have borders between countries, people are free to come and go. And when they move they bring fashion, music, movies, and culture. All those things are moving freely from country to country. This year (1996) approximately 4 million Japanese have left and entered Japan. In this type of international age, we have to stop looking at people and treating them as foreigners. We have to treat them as individuals. I believe there is less discrimination against foreigners than there used to be, but there is still more that can be done.

In America we say, "if my friend has a problem then I have a problem." It's very important to look at a problem from the other person's point of view. We must all have the courage to make the effort to rid the world of discrimination. 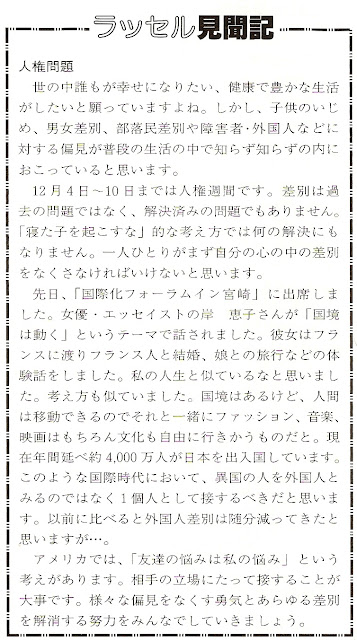 Post-Script
I wrote this article after going to a Human Rights Week event at the state capitol in Miyazaki City the year before. Some social department had invited me and two other foreigners to attend some event; I don't remember the details, but we were the Guests of Honor and had to talk about Human Rights in our countries. At the end one of us asked about Human Rights for foreigners, such as those native-born "Koreans" living in Japan. We were told that they were not a Human Rights issue but a State Department issue.
What I wrote here is, I believe, still true. Discrimination is not a thing of the past. We are living in a Golden Age where it is hard to imagine The Holocaust happening again; then we turn on the news and see murder in Somalia or Bosnia. We turn our heads or plug our ear-buds back in.
As I say, "We must all have the courage to make the effort to rid the world of discrimination."

By the way, "burakumin" are those "untouchables" in Japanese society like butchers or leather-workers who touched blood or did otherwise "dirty" work. They are still discriminated against, similarly I would guess to the lower castes in India.

As for what the hell "Human Rights Week" is, it's evidently a real thing. I had never heard of it before the Miyazaki State office told me about it. Check out the whole story here:   United Nations Human Rights Week homepage
Posted by Russell at 7:00 AM