This week I'll continue the post from last week regarding the first time Walt Kelly celebrated Christmas in POGO after the strip had gone national. This was December 1950. That year Christmas came on a Monday, and often newspapers did not print on that day. So Walt celebrated the season in the week preceding the holiday.

A few words about Sunday strips before I introduce this week's classic. Walt liked to really go all-out for the Sundays; not only because they were painted in full color, but because he knew that for some people the Sunday strips were the only ones that they would read. So he almost never continued the weekly story into Sunday; he always kept Sunday with a clear beginning, middle, and ending; and he sometimes had a separate Sunday storyline going on, which is what he did this month.

So below you'll see  Albert getting chased by various fauns. This story started in early November, when the fauns come across Albert and think he is a beautiful maiden. (never mind) As soon as they realize he was an alligator instead they decided to eat him. Pogo, meanwhile, got all dressed up in his Don Quixote finest to try to rescue him.

Click on the graphic to enlarge it to readable size. 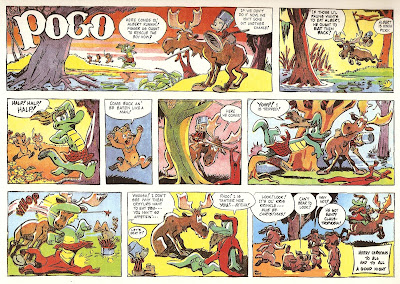 As Christmas-themed strips go, this one is sorely lacking. I think the moose serves only to link the Don Quixote image and the Santa Claus mistake at the end. The weak "Santa Claustrophobia" pun at the end is truly awwww-inspiring.

In Walt Kelly's defense, this was his first time out. He definitely would get better.

Merry Christmas from the Okefenokee Swamp!
Posted by Russell at 7:00 AM

Email ThisBlogThis!Share to TwitterShare to FacebookShare to Pinterest
Labels: Pogo