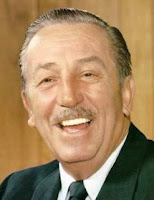 December 5, 1901 is the birthday of one of the most famous men in the world, Mr. Walt Disney. He started out as a businessman who wanted to entertain, and really, he never stopped being that....Nowadays many people find the "Disney-fication" of things to be troublesome, and I do have to admit that I feel this way sometimes. Go into a grocery store and ALL the coloring books they have will be Disney Product. Go into a toy department at a store like Kohls or Walgreen and the "name" toys are all going to be Disney Product. It's a little bit too much, I think. Now with Disney Company purchasing the Star Wars characters, I think they've crossed the line. Can't we have more than a handful of international conglomerates out there?

But I'm getting away from the main topic. Walt Disney wanted to create "the happiest place on Earth" and thought up Disneyland. In order to make money to support this un-heard of idea of a never-closing amusement park, he partnered with ABC (and then NBC) and sold them the TV show "The Wonderful World of Disney." It was a ratings success for years and years. Disneyland opened in 1955, but Walt hadn't bought the land *around* the park. In 1971 his company bought all the land around Disney World and once you enter "the zone" everything you experience has been Disneyfied.

Some people say that Walt Disney had a childish or control-freak view of the world. No facial hair on Disneyland employees and such. But I think he understood how delicate children's fantasies were, and on the whole his original visions were pretty good. How can you watch PETER PAN or SLEEPING BEAUTY and not be impressed? How can you watch THE JUNGLE BOOK (the last movie he was specifically involved in) and not be entertained? He was a genius, and if people after him didn't do quite as well as he did, well, that's not really his fault, now is it?