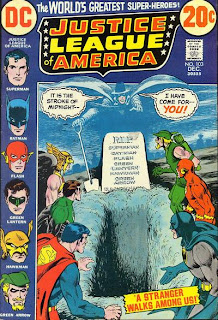 As mentioned on the cover blurb, my cover is a swipe of the original that appeared on JLA #182 by the late, great Dave Cockrum.

However, my story is not a re-make of that issue. Instead, it is a re-dux of JLA #103, by Len Wein, Dick Dillin, and Dick Giordano, shown here.

Last month, as you may recall, I featured six JLAers in a story modeled closely on an issue of SUPER FRIENDS. I replaced Superman with Martian Manhunter, switched in Black Canary for Robin, and added Hawkwoman. The reason I went to so much trouble for that story was that for this issue, I wanted to use these six characters. This time, I only had to switch Batman for the Elongated Man but otherwise left *this* story in tact. (Last month, the Batman was made afraid of the dark. I thought that was too good to not use, and Ralph Dibny switched in here easily, I think...more so than last issue.

In DCU continuity this is the first time the Phantom Stranger appears with/to the Justice League. (He had teamed-up with Batman in an earlier BRAVE & BOLD issue.) However, in "my" continuity this is not his "debut." I have no idea what it would have been, but back in JL # 14 I featured an illustration of him facing off Darkseid that I took from LEGENDS, so maybe that was the first time my JL met him. We'll never know.

I used JLA #103 as my base, so I gave story AND art credit to the team of Wein-Dillin, as shown below. It was great to try to copy one of the best workhorses there ever was; Dick Dillin's art was not flashy, but it was well-constructed. I learned a lot by following his lead. 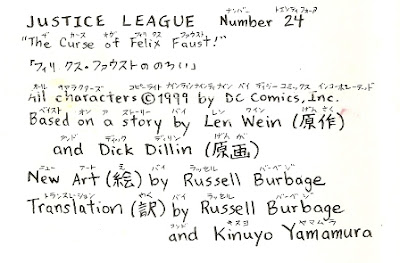 The translation work was again done by the very able and friendly Kinuyo Yamamura. Long gone are the discussions Shoko-san and I would have about appropriate translations; if something didn't make sense, Yamamura-san called me out on it. If it did make sense, she left it. Two comments in particular I remember trying to use verbatim from Len Wein's script, only to face translation issues. We'll talk about those in the AFTERWARD.

And here is the original Dave Cockrum cover I copied. You'll see I switched out a few of the characters, but more obviously I shifted the attention from the zombie about to rise here to the JLAers shocked at what was about to happen in my story. 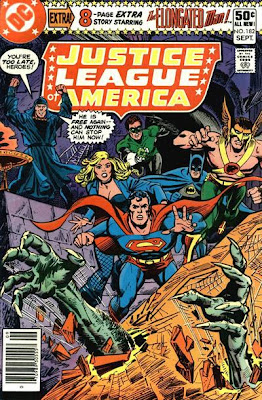