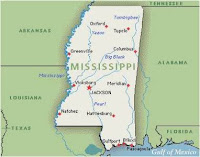 Today is the anniversary of Mississippi being admitted to our United States of America.

Parentage: The state "mississippi" comes from the river Mississippi, which was "mici zibi" in Ojibwa and means "great river."

Place in the Family
Number 20
Mississippi was the Darling of 1817,
as it came between
Indiana  (Dec 1816)
and Illinois (Dec 1818)
Here we go again....why were so many states added in the month of December?
They all get tax credits for squeaking in before the new year or something?

Motto
"By valor and arms"
Not quite sure what that means....

Nick-Name
The Magnolia State
Because the Magnolia is the state flower, of course.
The play "Steel Magnolias" was set in Louisiana, however.
On the License Plate
Up until recently it was a light house. Before that it was a magnolia.
By state law, the design has to change every five years.

State Flag
A "rebel" design in the corner on the otherwise French flag.
This was established in 1894;
before that the state flag had a white star on a blue background
in the corner and a magnolia tree in the center.

First City You Probably Think of
When You Think "Mississippi"
Tupelo
Actual State Capital:Jackson
State Size (Area) is 32nd of 50
Population is closer to 31st of 50
(per 2000 Census figures)


Anybody From Mississippi
Ever Grow Up To Be President?
No. 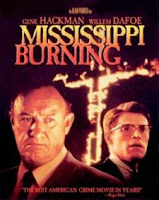 Sam Cooke
"You Send Me"

B. B. King
Guitarist Extraordinaire

Britney Spears
"Oops! I Did It Again" 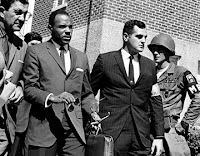 Jim Henson
creator of The Muppets

A Song For You....
"Jackson"
written by Jerry Leiber & Billy Edd Wheeler
sung by Johnny Cash & June Carter (Cash)
(there are plenty of Mississippi songs
to choose from, but this is one of my favorites,
so... forgive me for going with Johnny Cash!)