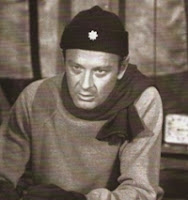 June 13 is the birthday of Major Frank Burns from MASH, as portrayed by Larry Linville.

Staff Duty Log 13 June
Corporal Walter O'Reilly, Company Clerk
0600 hours
The friendly old sun showed his friendly hot face
over the mountains of purple majesty as though
he was salutating, "Good morning to all."

So this clearly sets up that the date is June 13. Because the US entered the Korean War on June 30, 1950, and an earlier episode has already celebrated Frank's birthday with Trapper John (Wayne Rogers), this means this episode occurs on June 13, 1952.

The episode intertwines two plot threads: Radar trying to complete various writing assignments for his Writing By Mail course, and Hawkeye and BJ (Alan Alda and Mike Farrell) fighting to please Frank for his birthday. All the action appears to occur in the course of the one day, as the episode starts in the morning and ends in the evening.

My favorite MASH episodes occurred during the 4th and 5th seasons. This is partly because of the comedic talents of Larry Linville as Frank but also partly because of the guidance of initial producers Larry Gelbart and Gene Reynolds. After all three of these creative gentlemen left, the show went in a different direction. It wasn't bad; it just wasn't as funny.

Happy Birthday, Ferret Face!! Hope you and your wife were very happy in Fort Wayne, Indiana after the war....but I doubt it.