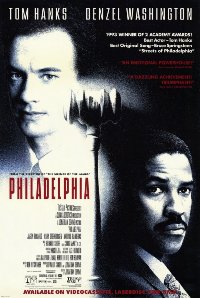 When the movie PHILADELPHIA came out I was still living in Japan. US (and other foreign) films usually come to Japan later than they do in their native countries. There are two main reasons for this: foreign film distributors want to send out bonafide hits, so they want to wait and see if a film has "legs" before booking it. And secondly, they need time to translate the English into sub-titles or dubbed native language.


So most "mainstream" Hollywood films that are not "summer blockbusters" like THE AVENGERS or INDEPENDANCE DAY tend to get to Japan maybe six months or even a year after their initial domestic distribution.
This is just a long way to tell you that by the time PHILADELPHIA came to Japan, Tom Hanks had already won the Academy Award for Best Actor for his portrayal of the lead, lawyer Andy Beckett.
So the film was packed when we went to see it. Instead of a "gay drama" it was sold as an "Academy Award Winning Classic."

I had always been a Denzel Washington fan (he had been wonderful in GLORY) and I didn't mind Tom Hanks. At the time this was a huge risk for Tom Hanks. He had been a TV actor and had been in minor hits such as BIG. With PHILADELPHIA he showed his true talent, brilliantly portraying the dying lawyer.  If he hadn't won over the fans he would have been roasted as "playing queer." If he did win over the fans and the critics,  he ran the risk of being typecast in "gay" roles.

However, he scored both professionally and in the popular press.

PHILADELPHIA was the first main-stream movie about AIDS discrimination. (LONG TIME COMPANION was made in 1989, but it was a minor hit compared to PHILADELPHIA. I didn't get to see it until it came out on video in the later 90s.) As such, there was a lot riding on its shoulders. The story goes that many producers and accountants in Hollywood were afraid to look at the AIDS health crisis head-on because they didn't think Straight America wanted to see those stories. It turned out those nay-sayers were wrong. (Side note: a great documentary-like movie about these times is AND THE BAND PLAYED ON. See it if you haven't already.)

It turns out that PHILADELPHIA falls straight (ahem) in the "dying hero" genre of movies. In this case it is AIDS, but it could be cancer or leukemia or any other fatal illness. As such there is no "guilt" given to Andy's character for his lifestyle. He is dying and he is being discriminated against; period. My one criticism was that the law firm was made out to be a bit too radically anti-gay; a more nuanced "villain" would have been better, I think. However, that is a minor complaint. I have read that many gay critics were not happy, thouh, with the way the story was told through/around the eyes of Denzel Washington's straight lawyer's point of view. Really, though, isn't that the only way it could have been done? He is the point of view that brings the audience into Andy's world. He is against Andy at the beginning, calling him a fag and being disgusted by him. Then he slowly realizes that people are people, and what was happening to Andy was, indeed, discrimination The Academy Award went to Hanks, but it is Washington's character who does the most growing. Truly, both actors are stupendous.

To sum up: if you haven't seen this movie yet, you should. Courtroom Drama. Friends Under Fire. Family Torn Apart. Love Story. Tragedy. Classic.

The song "Streets of Philadelphia" was written by Bruce Springsteen especially for the movie. Director Jonathan Demme, asked Bruce specfiically to write some music for the film. Bruce was on tour at the time, but when he finished he came up with this.

"Streets of Philadelphia" won the Academy Award for Best Original Song. It also won four Grammy Awards including Song of the Year.

Even now, after hearing it a hundred times, if I am feeling especially melancholy or sentimental it can bring a tear to my eye.

Thank you, Bruce, for writing and performing this wonderful tune.