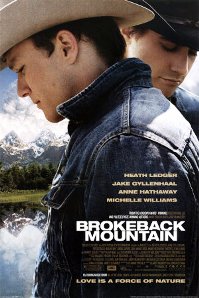 Is there anyone reading the internet in general and my blog in particular who hasn't heard of the movie BROKEBACK MOUNTAIN? I'm thinking no. Even if you haven't seen it (btw, I am constantly surprised by the people who have and have not seen this film) you certainly *know* of it. It's "The Gay Cowboy Picture", right?

Except that it's not. It was directed by Academy Award winning director Ang Lee. It was based on a short story by Annie Proulx. The screenplay (which won the Academy Award for Best Adapted Screenplay) was by Diana Ossana and Larry McMurtry. McMurtry is not some Gay Agenda Liberal Pinko; he's the author of LONESOME DOVE as well as TERMS OF ENDEARMENT.

The story is about one man and his absolute inability to connect to anyone in his life emotionally. After he has burned all of his bridges he finally makes baby steps to have an emotional connection with his daughter.

My opinion is that it was called "The Gay Cowboy Picture" by people who never actually saw it.

Heath Ledger is awesome as Ennis, the man who doesn't know how to make or keep emotional commitments. He takes a job herding a flock of sheep in the mountains with one other guy, Jack (portrayed by Jake Gyllenhaal). After too much time together they gradually become friends and then begin an affair. This scares the hell out of Ennis. Eventually he steps back violently from Jack and retreats to a new wife and new life away from the mountains.

The rest of the story is about how these two broken men come to the realization that they were at their best when they were together. It takes Ennis the entire film to realize this. Although it breaks our hearts for him to push everyone away, when he finally does allow someone in, it's an emotional victory.

It's a bittersweet, positive motion picture and deserved all of the praise it won.

If you have not seen it, you should. It is not a "gay love story." It is simply a love story with two guys.

My brother-in-law said he saw it and liked it, except for one particular scene when the men actually begin to have sex. It only lasts a moment, and is not graphic at all, so don't let that one scene scare you away from a wonderful love story.