You're in for a treat this time. JUSTICE LEAGUE #18 is one of my favorite stories I did; not only because it was based on wonderful source material (which it was!) but because I think I did a pretty bang-up job on my parts, too.

My story "The Coming of Eclipso" is based on the story in JUSTICE LEAGUE OF AMERICA #109, "Doom of the Divided Man" by Len Wein, Dick Dillin, and Dick Giordano. Len Wein wrote my favorite run of JLA stories, so it should not be a surprise that this is another one of my favorites.

JLA 109 starts with Red Tornado instead of Hawkman and Hawkwoman. Because he isn't a member of "my" JLA, I couldn't use him. Basic premise of the Eclipso-Gordon experiment is the same.

Wonder Woman was not an active member in 109, so I shoe-horned her in to my story. I think she stopped the ray-guns that Batman stops in 109.

Because Hawkman is used at the beginning of the story, I cut him from the Elongated Man-GA-GL chapter.

The Atom is used in JLA 109 but he isn't in my JLA anymore. (That's him on Batman's shoulder below) So I used Martian Manhunter. I hadn't realized that the Atom doesn't really *do* anything in that story. In mine I atleast have J'Onn catch the bad guy after Black Canary and Aquaman set him up.

And most differently, JLA 109 was based on Hawkman leaving the group. In my story there is no such sub-plot.

The title, too, was difficult to translate. It has a poetic ring to it in English, but I wanted to be more straight-forward. The English, "The Coming of Eclipso!" is translated as "The Eclipse Demon Eclipso."

For this issue I got my friend Shoko Taniguchi to help me. As I've talked about in the past, I was not happy with either her or Mrs. Ochiai, thinking both brought different strengths and weaknesses to the translation process. This is Shoko's last issue as associate translator. She did a good job while her heart was not really in it, and I thank her very much for helping me out as long as she did. I think this issue was pretty straight-forward where the translation was concerned...except for one item we will talk about in the Afterward.

One last thing....The credits below feature the pronunciation of each English word (the katakana) over each word. Try as I might, I could not find any information as to the proper pronunciation of Len Wein's name. So I guessed, and wrote the pronunciation as "wine." I have since met him and heard his name spoken, and know that it is pronounced "ween." Sorry, Mr. Wein! 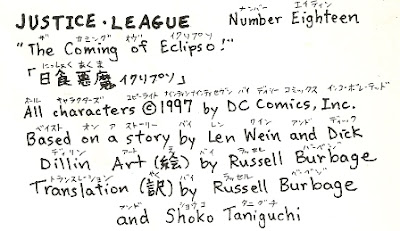