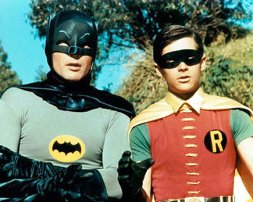 We all know Batman and Robin aren't really gay.

Even though they go by the names "Bruce" and "Dick."

Just because they sleep in the same room and change and shower together.

That doesn't mean anything!!!

Batman has the hots for Catwoman and for Silver St. Cloud.

Robin has slept with Starfire (to much controversy in the 80s) and has been in love with Barbara (Batgirl) Gordon for years.

So in honor of Pride Month, here for your enjoyment are some of the most (in)famous "gay" Batman and Robin scenes.

They are all actually published in DC comics. I promise. Nothing has been photo-edited.