DC came late to the "inclusion table;" MARVEL made history when they "outed" the first  mainstream gay super-hero in 1992. Of course, Northstar, the Canadian super-hero/mutant who made that announcement, made his debut in 1979. So he was a relatively new character. DC, when they finally got on the Pride Parade float, took one new character and two classic characters and "outed" them.

Obsidian was introduced in 1983 as a twin. His sister had Green Lantern-like abilities, but he had the ability to merge with his shadow and move around in darkness. (Odd that Northstar, too, was a twin, also with a super-powered sister). He hung out with a group of young heroes called Infinity, Inc for several years. While there he became close friends with another member named Nuklon. When Infinity, Inc broke up (and the book was cancelled) he and Nuklon joined the Justice League. 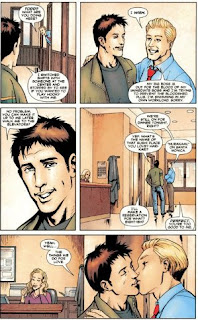 At about the same time that Northstar was making his historical announcement,  Obsidian made a comment of his own. In the pages of JUSTICE LEAGUE AMERICA he told his best friend, Nuklon, to the effect, "the only people I love are you and my sister." Nuklon then asked him point-blank if he (Obsidian) was gay, and he responded, "Why do we have to have labels?" This started a sub-plot about how Nuklon dealt with labels and what he would do if his friend really did turn out to be gay. At that time, Obsidian never admitted anything. It was kind of implied that he *was* gay and that his buddy wasn't reacting well, so he wasn't about to clearly "out" himself under the circumstances.

Eventually both of them took a leave of absence from the JLA and moved back into comic book limbo. Both re-appeared in the pages of JUSTICE SOCIETY OF AMERICA, but Obsidian's private life never came up until he was possessed by an evil magician. When he was freed from this power, Obsidian joked, "I'm cured! I'm not gay any more!" Then he laughed and made a point of admitting that he was just kidding and that he was, in fact, gay. This was in 2003. 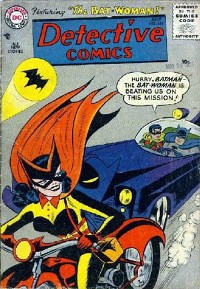 Then in 2006 Obsidian joined the cast of MANHUNTER. Here he was shown to not only have a boyfriend, but they are shown kissing several times and to be very much living together: sleeping and showering together. (see panel above) This is the first time I can recall a DC comic-book ever being this open about a character's homosexuality. And it was light years ahead of the stuff MARVEL was doing at the time. (See last week's article.)
Of course, MANHUNTER was cancelled and Obsidian faded away again, as supporting characters do. He has turned up in JSA from time to time but was never given the same amount of spotlight he had enjoyed in MANHUNTER. 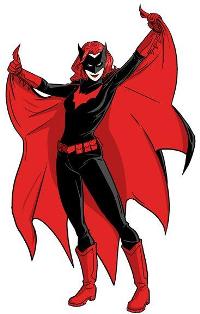 Meanwhile, also in 2006, a new character was created with an old name. Batwoman made her debut in the new order in the maxi-series 52. Originally the character of Bat-Woman was Kathy Kane, a millionaire circus performer who wanted to have adventures with Batman and Robin. DC added her to the mix in 1956 to help fight the rumors that Batman and Robin were gay. She appeared semi-regularly. Later her niece Bette arrived as well and called herself  Bat-Girl. Then in 1964 they disappeared when the "New Look Batman" made its debut.

It's a bit ironic, then, that the new Batwoman is a lesbian. She was announced as such when she made her debut, so there was no "outing" to be done. Her back-story includes having dated Gotham City police officer Renee Montoya. Montoya had been a supporting character in the BAT books for several years and had even appeared on the BATMAN Animated Series. (She was the police officer who always worked with Harvey Bullock.)  In 2012 BATWOMAN made its debut as an on-going series. As of this writing, it is the only mainstream comic-book title featuring a gay character as the lead.

Her costume was designed by comics great Alex Ross, but is basically a re-tread of the original Bat-Woman costume, substituting yellow for black. 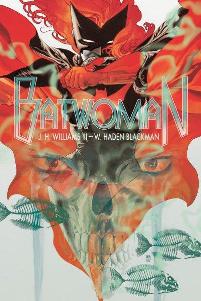 The latest gay character in the DC Line of Super-Stars is Green Lantern. You might have heard some of the announcements from last month. It was big news when DC announced that in the course of their re-vamping of their universe, a "classic" super-hero would be re-imagined as gay.

Now if you are not a comic-book fan, you probably have no idea what the hell this means.
I will try to explain it. DC and MARVEL have a perpetual problem with their characters, some of whom have been around for 30, 40, 50, or even 60 years. Superman and Batman made their debuts in 1938 and 1939, respectively. Spider-Man made his debut in 1962. So to keep their characters young and the stories fresh, both companies "re-invent" or "ret-con" their "worlds" every few decades. The current Batman, for example, is probably the third or fourth version. They are all known as Bruce Wayne; the main story doesn't change. But the villains and the tone and the characterizations do. A few paragraphs back I said how Bat-Woman and Bat-Girl hung out until "the New Look Batman" was created. Well, that was one of the times when DC started again, cleaning house and getting rid of story-lines and events that were no longer wanted. So Bat-Woman and Bat-Girl, for all intents and purposes, simply ceased to exist. 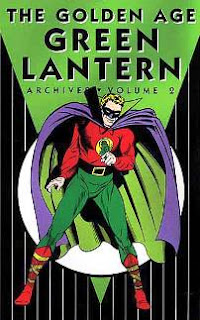 As for our newest star, Green Lantern as a character was introduced by Martin Nodell and Bill Finger in 1940. He was Alan Scott, blond and handsome railroad engineer, who wore a red, green, and purple  costume. (see picture) He was popular until the early '50s, when the initial WWII-backed comic book popularity died out.  Eventually he was replaced by Hal Jordan, brunette in green, black, and white. This is the character most people now associate with this name. Hal Jordan, cosmic policeman, is the guy Ryan Reynolds made the movie about last year.

HOWEVER, this time it was established that the Alan Scott version was "really" alive, too. He and his World War II era buddies were on a different dimensional plane than the Hal Jordan version. On "our" Earth we had the Justice League and Super Friends; they had the Justice Society and Infinity, Inc. They had the "straight" Bat-Woman and her neice Bat-Girl; we had the lesbian and a totally different Batgirl.

Because Alan Scott Green Lantern started his career in 1940, he was older, married, and actually had children. One child was a daughter, Jade, with Green Lantern-style powers. The other was a son, with darkness powers named......Obsidian.

So we've come full circle. In original continuity Green Lantern Alan Scott had a gay son, Obsidian. In the newest "re-invent" or "retcon" at DC, they have decided that the Justice Society did NOT start back in 1940 after all. They are making all of those "Golden Age" characters "Modern." Alan Scott is no longer old in this current world. Therefore he has no grown children ie no grown gay son. That's him, the hunky blond in (you guessed it)green, kissing his boy-friend, Sam. 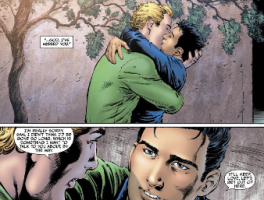 DC, in a move that seems logical if not a tad misguided, has taken the characteristics of "the son" and given them to "the father."

Now DC not only has conservative (?) groups angry at them for showcasing "alternative lifestyles" (like being a super-hero itself isn't alternative!) but they also have traditional comics fans like me mad that they are making a heretofore "straight" character "gay."

(Not to go all comic nerd on you, but there are plenty of Golden Age characters who never had wives or girl friends or children who could have been "outed" better than this. Dr. Mid-Nite is the first one to come to mind. Kudos to you if you even know who that is.) 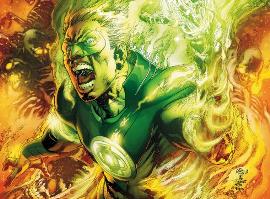 I'm not saying that DC can't do whatever the hell they want with their characters. However, like the time they made Aquaman a bearded, one-armed a$$-hole, I'm not sure this is what they *should* have done. I don't think making A Green Lantern gay was a problem (hell, there are 3,800 of them out there in space on "our" world) but taking THIS Green Lantern and *making* him gay.....hmmm. Not a big fan of this. There seems to be an utter lack of affection and care for the original character! Sure, it's just a name but on the other hand....tossing away 62 years of history? Really? Why? I guess I question the whole idea of having to re-imagine these characters. They were unique in being "the first guard." They were the "older brothers" and "mentors" to "new" characters like Batman and Hal Jordan-Green Lantern. For them to now be young and virile and modern....what's the point?

By the way, the "new" old Green Lantern doesn't have the same traditional red, green, and purple uniform shown above. All we have so far is him "flaming" here but it looks a little bit like Hal Jordan's uniform. THAT won't confuse even more people.

On a final note, I am saddened by all the hullabaloo about any gay characters. As I mentioned in the MARVEL column, this controversy about gay characters is all "much ado about nothing." The average comic-book reader's age is probably closer to 30 than 13, so the "corrupting the youth of our country" argument is probably wrong. I can't imagine a whole lot of nerdy straight white guys (I'm picturing THE SIMPSONS' Comic Book Shop Guy) *wanting* to read about a gay guy. Maybe that's why BATWOMAN is about a lesbian? We do love our women in spandex. Still, the average comic-book readers (and their kids or little brothers & sisters) are more likely to happen upon manga, filled with much more vivid hetereo-sex or ultra violence, then you can find in your average DC or MARVEL book. Yet, violence has always been more "okay" than sex. Now THAT is a crazy concept.