Oops! I forgot to write up about my experiences at this year's Wizard World Comic Con! Sorry!! 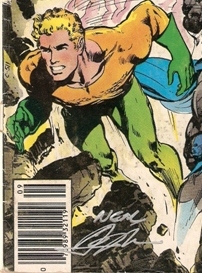 So the last week of September I took two days off from work to volunteer at the Con. Last year I volunteered for a day and a half and heard later that only volunteers who work on the *last day* get any free stuff (aka "swag"). So this year I decided to do the whole thing: prep work on Thursday and Friday, and then actual work on both Saturday and Sunday, too. I wanted some prizes for my hard work! ;-)

This year's show was supposed to feature William Shatner, but for some reason he was replaced by Patrick Stewart. Also Val Kilmer, Dean Cain, and John DeLancie ("Q" from ST:Next Generation) were the celebrities I recognized. There were another half-dozen celebrities that I did NOT recognize, but I'll get to them in a minute. On Thursday there was very little to do prep-wise; we toured the areas, got the lay of the land, filled in the required paperwork, and helped unpack certain things. Last year we had been stuck in a small hall kind of out of the way; this year we were back in one of the Grand Halls, and right away I felt we were going to have more fun in this open and inviting space than we had last year. Friday was more of the same prep-wise; we had to stuff catalogs and pamphlets into "gift bags" and just in general get things ready for the 5 PM opening. I'm never sure how these things happen, but as we got closer to the Opening Time I was assigned to the front gate. I was directed to help artists and exhibitors if they had problems, but to keep the paying customers out until it was officially open. So this is how it happened that I got to meet and chat with one of my all-time favorite artists, Mr. Neal Adams.

Keep in mind that the Wizard World staff people are not, by definition, from Columbus. I think they are from New York, or Chicago, or even Texas. They aren't local. So often I would be standing there listening to directions or whatever and somebody else would walk up and ask, "Where is the Hilton?!" or "How do I get back to the loading dock?" I made myself useful by being able to answer these types of questions with no fuss. That might be one of the reasons I was positioned at the front. I was also obviously not a Shrinking Violet or unable to handle myself in various situations, and I also did what I was told. All of those things might have something to do with how I was assigned over the weekend. So...anyway, I'm standing there helping people in various ways when I see a familiar face walk up to me. I met Neal Adams at the Baltimore Comic Con so I knew what he looked like. (He had signed my Aquaman, shown above.) I was beaming as I said, "Welcome to Columbus!" He introduced himself to me and I said, "I know who you are, Mr. Adams. I met you in Baltimore, and now I'm happy to have you in my home town." He said, "Next time we need to meet in MY hometown, New York." So I said, "I am planning on going this year. If I do I will stop by your booth." He had some registration questions, so I directed him to the staff so that he could take care of them. But I had talked to one of my idols! I was pretty happy.

On Saturday I showed up early, knowing the day would be hectic right from the beginning. I was at the front gate again controlling traffic until right after we opened, when the staff asked me to work at the Eliza Dushku booth. The what? It turns out she is an actress who was in BRING IT ON, SOUL SURVIVOR, JAY & SILENT BOB STRIKES BACK, and several other things I've never heard of. Oh, and she was on BUFFY, I think. So it was my job to stand at her area and do crowd control. Believe it or not, this was quite a job as many many people wanted to see her, and she was only there on Saturday so everybody had to get in line to see her then. The line snaked around and into Dean Cain's area, so we constantly had to be moving people or asking them to move on. Plus photography was forbidden, so we had to say, "This is a No Photo area, please" and ask people to stop. All during the day as I was working I also got to watch how Dean Cain was interacting with his fans, which was fun. I wanted to go over and get a picture signed but his prices were a bit too high for me...Now, of course, I wish I had...

I was originally scheduled to do Face Painting on Sunday (Kids' Day) so I thought that watching Dean Cain (not in a stalker-ish way!) would be the highlight of this year's work. Uh...no. Turns out it wasn't. :-)

Sunday I went in late because I hadn't actually walked around yet on any "off time." So in my civilian guise I walked the floor and went shopping. Unfortunately, some of the things I had seen while volunteering earlier were no longer available....like the Black Manta lead figurine I had seen, and the Neal Adams Aquaman/JLA print I had wanted. I did buy an Alfred E. Neumann MAD Aquaman action figure. And I bought a t-shirt from my buddy Terry Huddleston and some nifty JLA art by Alan Schell (shown below).

Then I was ready to put my Volunteer t-shirt back on and get back to work. As soon as I walked up to the volunteer coordinators, they asked me what I was supposed to be doing; I told them I was scheduled for face painting. They told me to forget that and to go see the guys at the Patrick Stewart area because they needed me. So...off I went! I then spent the next three hours or so at the Patrick Stewart area! My job was to keep people organized before he showed up, then to help keep the line moving after he *did* show up, and to answer questions about what his schedule was when he went away again. I'm not gonna lie; this was pretty cool!

When he finally did show up I was standing less than four feet from where he was sitting. I could hear how nice he was to his fans, as he spoke in that awesome baritone voice. One young lady came and talked to him about Shakespeare; she brought a copy of one of his plays for Mr. Stewart to sign. He had her *recite* some of the lines and did a quick coaching bit with her! I know that made her day!! When there was a lull in the line some guy walked by and shouted out that he thought Patrick Stewart had been hilarious in an episode of FRASIER. They chatted, and when he walked off I was emboldened to say, "I saw you the other day on Jon Stewart's DAILY SHOW, and I thought that was pretty funny, too." He then talked TO ME: "Yes, that was a blast to do. Those guys are fun to work with." So here I am, having expected to spend my day face painting with kids, spending my day with Patrick Stewart!! I was quite happy, I gotta say.

His manager came by at around 2 PM and they got ready to go. I pulled out a copy of the programming one-sheet and asked him if he wouldn't mind signing it. I pointed out my last name Burbage is the same as  Shakespeare's buddy Richard Burbage. He smiled, looked at my name tag, and then signed my program. He walked off to catch an airplane a few minutes later. John de Lancie was at the nearby table, so it was easy to ask him to sign my program, too. As the convention was winding down I would have liked to get Dean Cain's autograph, too, but by the time I got over to his table he was gone. In fact, by that time most of the other volunteers were going around getting their volunteer t-shirt signed by artists and celebrities. There was a huge line around The Boondock Saints tables, and so I was actually working while most of the other volunteers were "off." That's okay, though, because I have never seen BOONDOCK SAINTS and had never heard of any of the actors. The staff guys were telling me I *had* to see the movie, so I have added it to my list of movies to see. It's easy to not be impressed with celebrities when you have no idea who they are, haha! 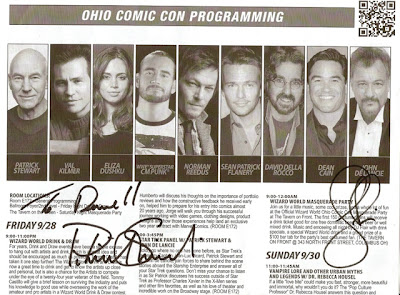 After all the clean-up when the celebrities were gone and things were over, we got our pick of a few cool things. I got a t-shirt that says COMIC CON on it, plus a few toys. But the feeling of fun while representing my city is what was really great. Next year I'll have to go to more of the off-site events like the Costume Contest and the drinking. Fun weekend, and a great way to start my Birthday Week.
Posted by Russell at 4:20 PM

Email ThisBlogThis!Share to TwitterShare to FacebookShare to Pinterest
Labels: Celebrities, Conventions, My Birthday