BOO!
THE SCARIEST SUPER-VILLAINS OF ALL TIME!

This being Halloween AND "Wednesday Comics" day, I figured I should tell you who *I* think are the seven scariest super-villains in comics. However, one quick note: I didn't include the Uber-Cosmic characters like Darkseid or Galactus. Yes, anybody who could show up and actually EAT Earth is pretty damn scary. Still, they are obviously "fantastic" characters and therefore not quite as scary as pseudo-real characters. For example, the shark in JAWS is infinitely more scary than Godzilla, right? Both menaces could actually get you if you enter into their reality, but one would require a step and one a whole leap to get there! Anyway, that's my logic and I'm sticking to it. Ready?!


7. THE GREEN GOBLIN
This is a character that has become scarier and scarier as his history has gotten longer and longer. At first he was just another weird Spider-Man villain, throwing pumpkin bombs on people while robbing banks. Then, as his back story was slowly revealed we learned that he was the father of Spider-Man's best friend. He was the victim of poison gas that made him into a schizophrenic. He was a sadist and a murderer. As we learned these things, THE GREEN GOBLIN went from being a guy in a goofy goblin costume to the one threat that Spider-Man had to stop. He was willing to hurt anyone to get to Spider-Man, including his own son. And in one of the greatest Spider-Man stories ever, he also killed Spider-Man's first girl-friend, Gwen Stacy. Now, his costume isn't so much goofy as it is chilling.

6. THE SCARECROW
Throw the loveable Ray Bolger "Scarecrow" image out the window, this Batman villain's main schtick is fear. He can make you fear anything, either something you really do fear or something he makes up for you. Which would be worse? He once made Superman afraid of flying, and Aquaman afraid of water. He once tried to cripple Batman by making him imagine that Robin had been killed. That's all pretty damn impressive. THE SCARECROW could read you like a cheap pulp novel and have you quivering on the floor whispering, "mommy!" in a minute. Don't mess with him.


5. THE FATAL FIVE
Most super-villain groups fall into one of two categories: they are either made-up of established characters, such as The Legion of Doom on TV's SUPER FRIENDS, or they are made from whole-cloth as their own entity, such as The X-Men's Brotherhood of Evil Mutants or the Legion of Super-Heroes' greatest foes, THE FATAL FIVE. They were accidentally put together by the Legion to help them defeat a menace they could not handle alone; once the menace went away, THE FIVE did not. Tharok, the evil cyborg, is the leader. Emerald Empress is like an evil and fashion-conscious Green Lantern. The Persuader owns an atomic axe that can cut through anything. Mano wields the touch of death; he destroyed his entire home-planet because he hated them so. Validus is a giant hulk of a creature who can also shoot electrical blasts out of his brain. Each of these characters are bad-asses in their own right; banded together, the fear level is FIVE and climbing.

4. GORILLA GRODD
When I was a kid, I made up comic-book stories. One of my stories featured a group I called "The League of Fear." It featured characters like The Lizard, The Tarantula, Two-Face, THE SCARECROW, and this guy. He's a gorilla. Have you seen gorillas? They are f'ing HUGE. Go to a zoo and just imagine one of them getting loose. That's enough to make most people pee in their pants right there. Then make this escaped gorilla into GRODD, who has mental telepathy that puts Martian Manhunter or Saturn Girl to shame. Oh, and he has an ego the size of Africa and he thinks he's much better than us silly humans. Put it all together and we are talking absolute fear! Come on, I ask you: what is scarier than a gorilla smarter than you are?! 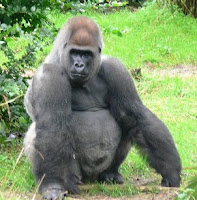 3. ULTRON
There are several robotic villains who are out to destroy mankind; DC's BRAINIAC comes to mind. BRAINIAC would have made this list, but his green android look had him sporting short-shorts, not the most fear-inducing clothing (unless they are worn by grossly obese people), while his later mechanical look always conjured up images of him as a SUPER POWER action figure, so...minus points for that. Besides,  no robotic villain has been shown to have the heartlessness, the ruthlessness, the sheer cold-bloodedness of Marvel's ULTRON. He has come very close to wiping out all of humanity on several occasions. It's only the power and team-work of The Avengers who keep the rest of us safe. ULTRON would destroy you in a heart-beat....yours, not his, because he doesn't have one.... so stay waaay clear of him.


2. THE RED SKULL
First, his appearance is one of the creepiest you could possibly imagine. The recent CAPTAIN AMERICA film got that look right; he was down-right scary. Second, he's a Nazi. Nazis are scary; that should go without saying. And Third, he's a megalomaniac scientific genius. That can't be good. Not only has he tried to destroy the majority of the world on several occasions, THE RED SKULL has also turned Cap against his partner, The Falcon, and has killed or tried to kill the people around Cap for years. Not a nice guy (see: reference above about him being a Nazi, d'uh!)

1. THE JOKER
Probably no one is surprised to see THE JOKER on this list. I mean, he was portrayed so menacingly in the recent DARK KNIGHT RETURNS movie by Heath Ledger. His over-the-top never-can-trust-him character trait is what makes THE JOKER one of the scariest villains out there. Let me try to explain it from the point of view of one of his henchmen: you get out of the pen, you need a job, you show up at the henchmen temp agency and instead of getting somebody safe like Mirror Master or The Penguin, you're told that THE JOKER is looking for people. Yikes! This is the guy who kills his henchmen like other people kill flies. In several of his appearances THE JOKER murders people simply because they are in his way. Yeah, if you are un-lucky enough to ever meet this guy, pray you survive.