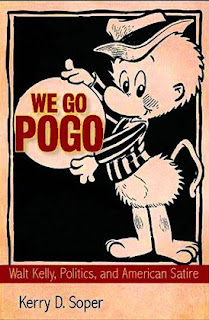 Any one who reads this blog on any type of regular basis knows that I LOVE "POGO" by Walt Kelly. Hell, I just wrote a commemorative article about Walt Kelly on the anniversary of his death last week! It should not come as any surprise that I go to places like ebay and amazon and type in "POGO" just to see if there is anything new (or newly available).

Which is how I found the topic of today's article, WE GO POGO by Kerry D. Soper. Professor Soper is an associate professor of humanities, classics, and comparative literature at Bringham Young University. He is the author of Garry Trudeau: Doonesbury and the Aesthetics of Satire.

While I'm quoting the back of the book jacket, how about this for a write-up?
Walt Kelly (1913-1973) is one of the most respected and innovative American cartoonists of the 20th Century. His long-running POGO newspaper strip has been cited by modern comics artists and scholars as one of the best ever.....WE GO POGO is the first comprehensive study of Kelly's cartoon art and his larger career in the comics business. Author Soper examines all aspects of Kelly's career...from his high school drawings; his work on such animated Disney movies as DUMBO...; and his 1930s editorial cartoons for LIFE....Soper taps Kelly's extensive personal and professional correspondence and interviews with family members, friends, and cartoonists to create a complex portrait of one of the art form's true geniuses.

Which is all well and good, except....it aint' true! In the immortal words of Albert the Alligator: Rowrbazzle! This is a tedious, badly-written book about a subject that should have been...well...ANIMATED, for crying out loud! I tried....really I tried...to read this book. I got as far as the second chapter, Comedy and Satire in POGO, page 98, before I had to give up. (The book is 218 pages of TINY print 42 lines per page and sparsely I say *sparsely* illustrated!!) (To which Churchy would say, "I's prefers rutabeggas to sparsely in my salads," and Owl would say, "What's that you say? Who's a beggar? Homeless, here in the swamp!? We need a program, I tell you! Stamp out homelessness!")

If you are possibly thinking I am exaggermatating the extent of the boringness of this boring book, I quote again, verbatim verbiage from the vernal villain:
In addition to behaving like a Shakespearean fool in this respect, Pogo also takes on the pedigree of a satiric minstrel or griot. The truth-telling minstrel figure has deep roots in the European tradition; like the jester or fool, the minstrel in some cases had special license to criticize authority figures or parody the official voice and texts of the culture. West African culture had its own version of this privileged social critic, the griot, the feared but protected community jester who "combined the talents of the musician with those of the innovative poet (weaving "his own comments, moral judgments and isolated poetic images into his songs") and the clever trickster-jester to accomplish his ends." (Watkins 64) (page 84, University Press of Mississippi edition)

To this I say:
Deck us all with Boston Charlie, Walla Walla Washington and Kalamazoo!

If you like POGO and/or are a fan of Walt Kelly, DON'T buy this book. It's by some professor who is trying to use half-dollar words when the five and dime variety would suffice just as well. The jacket says it's about Kelly, but I read the Introduction and The Short Biography and there were very few quotes. Just a lot of talk by Professor Soper. You don't need a lot of words to understand and appreciate POGO. Here, let me show you:

THIS is what POGO was all about (click to en-biggen). 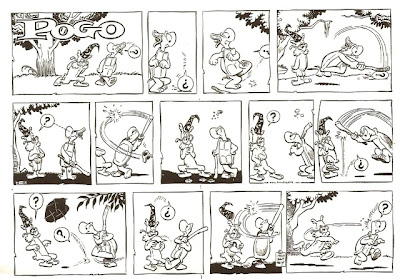 I repeat, don't buy this book. Borrow it from you local library if you think you'd like to validate my opinion. But if you're going to buy something about/by Walt Kelly, buy THIS instead!!


Addendum 12-21-12
I got the following comment from Professor Soper himself, and it made me feel a *tad* harsh in my criticism. I'm not going to back-pedal in my criticism of some of his word choices ("griot"? really!?!?) but perhaps I should have been more clear in my main criticism: it ain't the book I thought it was going to be. And that is my problem, not Professor Soper.
Honestly, I have been thinking I need to buy this book just because I want to have it in my collection.
So.....go to your library and borrow it. Read it. Then send Professor Soper a comment asking him to write more lively the next time he writes about something so inherently fun.
Posted by Russell at 7:51 PM