Worst Comic of The Month? 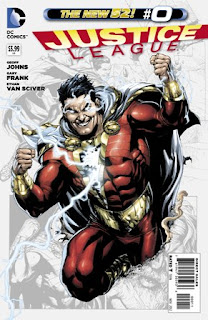 Okay, so the title of today's post may be a bit on the hyperbolic side, but let me explain. Last month I rushed into my comic-book shop to pick up the three or four comics I buy regularly. One is AQUAMAN, of course. The others are FIRESTORM (insert random link to The Fire and Water podcast), EARTH-TWO, and JUSTICE LEAGUE;  the last two because I have always loved the JLA and the JSA. Neither of these classic groups are actually alive in current continuity so are not currently IN either of these books, of course, but I can still hope, can't I? ;-)

So I grab up those four comics and rush home. Later, I notice that this is Captain Marvel on the cover, but I think, "Okaaay, Shazam must join the JLA in this issue....?" Because the book is called JUSTICE LEAGUE I kinda expected to read about, oh, I dunno....the JUSTICE LEAGUE!!! Instead I read pages and pages about the annoying brat who is the current Billy Batson and how he most undeservedly receives the power of SHAZAM. And...then the book is over.

WHAT THE HELL JUST HAPPENED?

How in the world can DC think that it is okay to print some Captain Marvel-wannabe crap in the pages of a book called JUSTICE LEAGUE, with absolutely NO JLAers present in the story!?!?!

I take it DC is not interested in long-term plans to continue to rape my wallet, as I will be even more careful about what I buy in the future! THIS is why you don't want to just order books and pick them up without looking at them, because if I had taken a moment to check I would NOT have paid for this toilet paper.