Scary TV From The Seventies

To help celebrate Halloween Week, I want to talk about the scariest TV shows I ever watched.  When I was a kid I used to watch a lot more TV than I do now. I would watch cartoons in the morning before going to school (Beanie Boy & Cecil, anybody?) and then I'd watch the syndicated re-runs as soon as I got home *from* school (Gilligan's Island, F-Troop, Ultraman, Batman, Star Trek etc. etc. etc...!) At night I would watch the same shows my parents or older sisters or brother watched. Sometimes, though, I would happen upon a night when nobody else was watching....and these four TV-movies are the ones I remember TO THIS DAY. 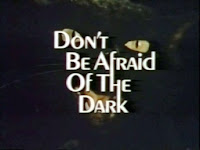 DON'T BE AFRAID OF THE DARK
This movie starred Kim Darby (from an episode of STAR TREK, and the original John Wayne version of TRUE GRIT) and James Hutton (soon to be one of my favorites from ELLERY QUEEN). They were newlyweds or something and he was busy being "the husband" and she was busy with working on re-modelling the old house they had recently bought. Well, somehow when she unplugged the fireplace or the furnace or some old room in the house she accidentally freed a bunch of gremlins or gargoyles or some-such creepy night people. Of course, they never showed themselves to anybody except her. Of course, the husband didn't believe her story. Of course, they came at night when she was alone and she was never heard from again.
Morals of the story: 1. Believe your spouse when s/he tells you there are creepy little monsters living in your house. I mean, why wouldn't you? 2. Never buy an old house and try to re-model it. ESPECIALLY if it is off in the woods of New England or somewhere creepy. 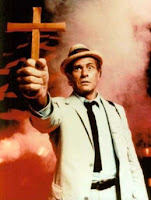 THE NIGHT STALKER
This is the movie that was so successful it spawned a sequel, THE NIGHT STRANGLER, and then a series, KOLCHAK: THE NIGHT STALKER. The title referred to a vampire who was "living" in Las Vegas who found plenty of potential food at the casinos and shows. Carl Kolchak, portrayed by the great Darren McGavin, is a newspaper reporter who investigates these murders and comes to realize that they are the work of a vampire. This is probably the best "what if vampires really existed?" movie I've ever seen. In the sequel, Kolchak is in Seattle and comes across a zombie-like man who lives off the blood of others. This was another atmospheric tale, but no where near as creepy as the first one. Still, the ratings these movies got were high, so the TV series was green-lighted. Although it only lasted one season, KOLCHAK (now becoming the Stalker of the title, rather than being the prey) had plenty of wonderful episodes. I will try to profile the series as a whole at a later date.
Moral of the story: 1. Don't believe everything you read in the papers. 2. There really are vampires out there.

TRILOGY OF TERROR
This TV-movie starred Karen Black in three separate mini-dramas. In one she is a put-upon college professor in a small New England town who is taken advantage of by a Big Man On Campus. In the second, she plays twin sisters who are constantly at each other's throats. And in the third she receives an African token which turns out to be alive and after her! This is the one that everyone who has ever seen it remembers. I swear somebody took this story (by horror-fantasy writer extraordinaire Richard Matheson) and created the Chucky movies from it.
Morals of the story: 1. Don't sleep with your teacher. 2. Get along with your siblings. 3. If you ever receive a magical African token with strict instructions on how to take care of it, FOLLOW THEM. 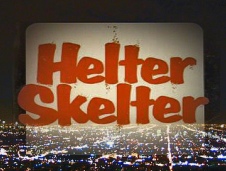 HELTER SKELTER
This is the TV movie that was made about the Sharon Tate murders in 1969. This isn't a horror movie in the traditional sense because  there are no vampires or zombies, but it is still the most horrific story I've ever heard of and Charles Manson (and people like him) is still my main bogey-man. Scary? Hell yes! Who needs to be afraid of zombies when there are actual people out there who will kill you just because you happen to live in the wrong house?
Morals of the story: 1. Don't buy a used home out in the country; you don't know who lived there before you did.