Note: "Russell's Ken-Bun-Ki" is a series of articles I wrote for my Japanese City Hall newsletter back in 1996. They were articles about life in America or life in Japan as experienced by an American.
This one from October 31, 1996 and is about American Election Day.

Last week was the election for the Japanese Congress. In America our election will be November 5 (1996). American elections are always held on the day after the first Monday in November. This year's election will be for every House of Representatives member (the US "lower house"), one-third of the Senate (the US "upper house"), local officials, and, of course, the President. There are 435 Representatives and 100 Senators (2 from each state), so approximately 33 will stand for re-election.

The House of Representatives are elected to two year terms. Senators are elected to six year terms, but instead of having all 100 Senators run for election at the same time, their terms are staggered so that every two years one-third of them must run. Presidents' terms are for four years, and they can serve only two terms.

Americans can vote when you turn 18. You register with whatever state you are living in when you turn 18. If you are not actually in that state on election day you can get an "absentee ballot" and vote by mail. People like me who are in foreign countries can also vote this way. Recently ballots have become computer punch cards, so you don't have to write in your candidates' names by hand like people do in Japan. You pick the candidate's name on a column and blacken in a circle or punch out a hole. It's very easy. Results are not counted by hand but by computer, and the results can be announced very quickly. Therefore the polls can stay open later to allow more people to vote.

In America President Clinton belongs to the Democratic Party; former Senator Dole belongs to the Republican Party. These are the two major political parties in the USA.


Who will be the US President as we head into the 21st Century? I am looking forward to this election very much. I can hardly wait. 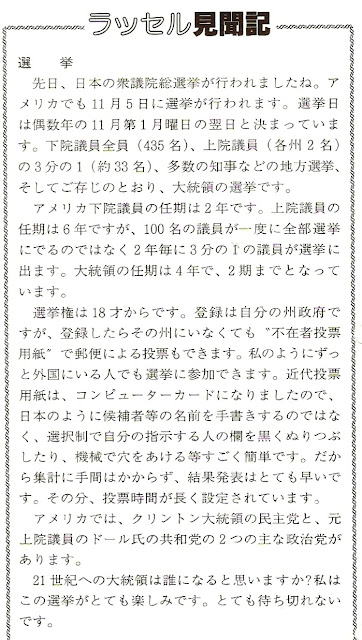 Post-Script
So obviously this is another one of those articles that tells about US culture instead of Japanese. The Japanese political system is based on German and British systems; in other words, the leader of the main political party becomes the Prime Minister and creates a cabinet from his party. They have the authority to call an election anytime between the last election and four years. So if the Prime Minister is riding a popular wave of support, it behooves him to call an election and hope that he and his party are re-elected at this time.

Voting age in Japan is twenty, which is also the age you can drink alcohol and smoke cigarettes.